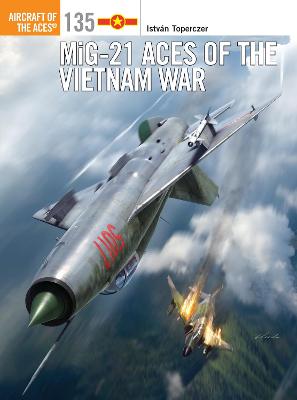 MiG-21 Aces of the Vietnam War

Description - MiG-21 Aces of the Vietnam War by Istvan Toperczer

Having learned their trade on the subsonic MiG-17, pilots of the Vietnamese People's Air Force (VPAF) received their first examples of the legendary MiG-21 supersonic fighter in 1966. Soon thrown into combat over North Vietnam, the guided-missile equipped MiG-21 proved a deadly opponent for the US Air Force, US Navy and US Marine Corps crews striking at targets deep in communist territory.

Although the communist pilots initially struggled to come to terms with the fighter's air-search radar and weapons systems, the ceaseless cycle of combat operations quickly honed their skills. Indeed, by the time the last US aircraft (a B-52) was claimed by the VPAF on 28 December 1972, no fewer than 13 pilots had become aces flying the MiG-21. Fully illustrated with wartime photographs and detailed colour artwork plates, and including enthralling combat reports, this book examines the many variants of the MiG-21 that fought in the conflict, the schemes they wore and the pilots that flew them.

» Have you read this book? We'd like to know what you think about it - write a review about MiG-21 Aces of the Vietnam War book by Istvan Toperczer and you'll earn 50c in Boomerang Bucks loyalty dollars (you must be a Boomerang Books Account Holder - it's free to sign up and there are great benefits!)

Dr Istvan Toperczer is a flight surgeon with the Hungarian Air Force. In his spare time, he has become one of the few individuals from outside Vietnam to be given open access to the files of the Vietnamese People's Air Force (VPAF). He has made numerous visits to Hanoi, and other Vietnamese cities in the past 20 years, and has interviewed many of the leading aces from the war years. He has written two titles in Osprey's Combat Aircraft series: MiG-17 and MiG-19 Units of the Vietnam War and MiG-21 Units of the Vietnam War. Jim Laurier is a native of New England, growing up in New Hampshire and Massachusetts. He has been drawing since he could hold a pencil and throughout his life he has worked in many mediums creating artwork on a variety of subjects. He has worked on the Osprey Aviation list since 2000, and in that time he has produced some of the finest artwork seen in these volumes.

A Preview for this title is currently not available.
More Books By Istvan Toperczer
View All