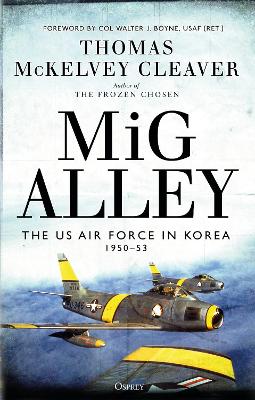 Description - MiG Alley: The US Air Force in Korea, 1950-53 by Thomas McKelvey Cleaver

Following the end of the Korean War, the prevailing myth in the West was that of the absolute supremacy of US Air Force pilots and aircraft over their Soviet-supplied opponents. The claims of the 10:1 victory-loss ratio achieved by the US Air Force fighter pilots flying the North American F-86 Sabre against their communist adversaries, among other such fabrications, went unchallenged until the end of the Cold War, when Soviet records of the conflict were finally opened.

Packed with first-hand accounts and covering the full range of US Air Force activities over Korea, MiG Alley brings the war vividly to life and the record is finally set straight on a number of popular fabrications. Thomas McKelvey Cleaver expertly threads together US and Russian sources to reveal the complete story of this bitter struggle in the Eastern skies.

» Have you read this book? We'd like to know what you think about it - write a review about MiG Alley: The US Air Force in Korea, 1950-53 book by Thomas McKelvey Cleaver and you'll earn 50c in Boomerang Bucks loyalty dollars (you must be a Boomerang Books Account Holder - it's free to sign up and there are great benefits!)


A Preview for this title is currently not available.
More Books By Thomas McKelvey Cleaver
View All