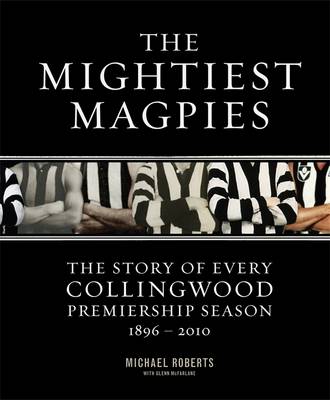 The Mightiest Magpies: The Story Of Every Collingwood Premiership Season

Description - The Mightiest Magpies: The Story Of Every Collingwood Premiership Season by Michael Roberts

It's 1902 and Collingwood introduces short-passing tactics that revolutionise the game. It's 1917 and the Magpies rally to keep the VFL competition alive, providing welcome distraction from the war. It's 1930 and the Pies with their fourth premiership in a row. It's 1958 and Phone Kyne is urging his players to bleed for him, to protect that record. It's 2010 and the supporters start chanting, possessed with black-and-white belief. While each premiership season is unique, each bears the Collingwood stamp in some way. From 1896's delivery on a promise of 'Progress and the Premiership' to 2010's 'Side by Side' victory, the importance of team effort, fighting to the end and solid leadership on and off the field emerge to define the character of the men who have pulled on the black-and-white, and the club. Whether it's a behind victory, a triumph of the underdog, and the brilliance of a well-drilled and talented team, the journey to each flag is recreated in this great tale of sustained success.

Book Reviews - The Mightiest Magpies: The Story Of Every Collingwood Premiership Season by Michael Roberts

» Have you read this book? We'd like to know what you think about it - write a review about Mightiest Magpies: The Story Of Every Collingwood Premiership Season book by Michael Roberts and you'll earn 50c in Boomerang Bucks loyalty dollars (you must be a Boomerang Books Account Holder - it's free to sign up and there are great benefits!)

Michael Roberts is a Melbourne-based journalist and author with a particular interest in Australian Rules football and its history. He has written several books on the game, including 1998's High Flyers- The Greatest Marks of All Time, and was the pictorial editor for 100 Years of Australian Football, the AFL's Centenary book. Michael currently edits and produces supporter magazines for five AFL clubs. He is not the former St Kilda player turned TV reporter.

A Preview for this title is currently not available.
More Books By Michael Roberts
View All

GingerNutz in Bloom: From Supermodel to Super Stylist and Beyond Fashion
$44.99 $49.99