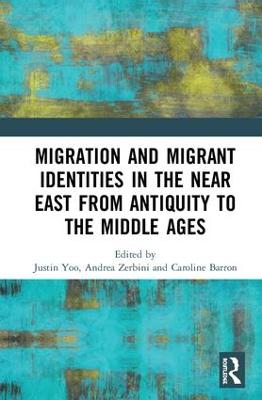 This book brings together recent developments in modern migration theory, a wide range of sources, new and old tools revisited (from GIS to epigraphic studies, from stable isotope analysis to the study of literary sources) and case studies from the ancient eastern Mediterranean that illustrate how new theories and techniques are helping to give a better understanding of migratory flows and diaspora communities in the ancient Near East. A geographical gap has emerged in studies of historical migration as recent works have focused on migration and mobility in the western part of the Roman Empire and thus fail to bring a significant contribution to the study of diaspora communities in the eastern Mediterranean. Bridging this gap represents a major scholarly desideratum, and, by drawing upon the experiences of previously neglected migrant and diaspora communities in the eastern Mediterranean from the Hellenistic period to the early mediaeval world, this collection of essays approaches migration studies with new perspectives and methodologies, shedding light not only on the study of migrants in the ancient world, but also on broader issues concerning the rationale for mobility and the creation and features of diaspora identities.

Buy Migration and Migrant Identities in the Middle East from Antiquity to the Middle Ages by Justin Yoo from Australia's Online Independent Bookstore, Boomerang Books.

» Have you read this book? We'd like to know what you think about it - write a review about Migration and Migrant Identities in the Middle East from Antiquity to the Middle Ages book by Justin Yoo and you'll earn 50c in Boomerang Bucks loyalty dollars (you must be a Boomerang Books Account Holder - it's free to sign up and there are great benefits!)

Justin Yoo is a doctoral candidate in the Department of Classics at King's College London, UK, where he is writing a thesis on Greek migration, trade, andÃ£ interaction with Egypt during the 7thÃ£ to 4thÃ£ centuries BC. He has an MA in Egyptian Archaeology from theÃ£ Institute ofÃ£ Archaeology, University College London, UK, and a BAÃ£ in Anthropology, Arabic and French from the City University of New York, USA. Andrea Zerbini is a Research Associate on the Endangered Archaeology in the Middle East and North Africa (EAMENA) project based at the University of Oxford, UK. His research focuses on the Near East between the Roman and the early-Islamic period, with a particular emphasis on the archaeology and history of rural settlement, patterns of human mobility and migration. He holds a doctorate in Classics from Royal Holloway, University of London, UK, and has been a Postdoctoral Visiting Research Fellow at the Council for British Research in the Levant (CBRL)/British Institute in Amman, Jordan, and a Fondation Fyssen Postdoctoral Fellow at Paris X-Nanterre, France.

A Preview for this title is currently not available.
More Books By Justin Yoo
View All

Migration and Migrant Identities in the Near East from Antiquity to the Middle Ages
$70.19 $77.99