Australia remained an isolated outpost of British civilisation until the dismantling of the White Australia Policy in the 1970s. Since then migrants from across Asia have made Australia their home contributing to the nation's economic development and helping to make Australian society one of the most culturally diverse in the world.

Find out how people from Asia were a part of early colonial society and how the trade ties with countries to Australia's north helped supply the growing colonies with many of their imported needs. Asian countries are now some of Australia's main trading partners and this economic interchange is helped by the many Asian migrants who have made Australia their home.

ABOUT THE MIGRATION TO AUSTRALIA SERIES
Australia is a country built on migration. People have been seeking a new life in Australia's cities and country regions from the colonial era up until the present. This series explains why they chose Australia as their destination what the international conditions were that caused them to leave their homelands and how thousands of migrants have contributed to making Australia the nation it is today.

Other Editions - Migration From Asia by William Day 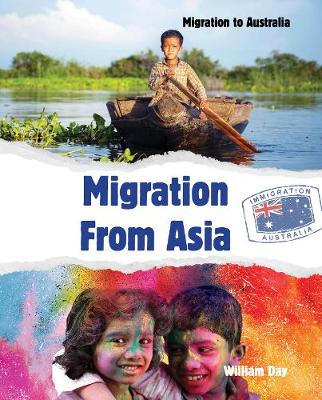 » Have you read this book? We'd like to know what you think about it - write a review about Migration From Asia book by William Day and you'll earn 50c in Boomerang Bucks loyalty dollars (you must be a Boomerang Books Account Holder - it's free to sign up and there are great benefits!)

50 Drag Queens Who Changed the World: A Celebration of the Most Influential Drag Artists of All Time
Dan Jones
$16.79 $19.99

Puberty in Numbers: Everything you need to know about growing up
Liz Flavell
$16.79 $19.99