Description - Miles And Me by Quincy Troupe

Poet, activist and journalist Quincy Troupe's candid account of his friendship with Miles Davis is a revealing portrait of a great musician and an engrossing chronicle of the author's own artistic and personal growth. Miles and Me describes in intimate detail the sometimes harrowing processes of Davis's spectacular creativity and the joys and travails Davis's passionate and contradictory temperament posed to the two men's friendship. Miles and Me shows how Miles Davis, both as an artist and as a black man, influenced Troupe and whole generations of Americans while forever changing the face of jazz.
In 1985, Spin magazine hired Troupe to do an exclusive two-part interview with the by-then legendary jazz artist Davis. The hour-and-a-half scheduled interview stretched to ten hours. After it was published, Davis was so enamored of Troupe and the interview that he finally relented to a major publisher's request that he write his autobiography under the condition that they could get Quincy Troupe to write it. Miles- The Autobiography became an instant bestseller and opened up the entire field of popular music autobiography. Years later, Quincy went back to his notes of his time with Miles that had been so important to them both, and produced this more intimate book, Miles and Me, told from his side of their friendship.
Miles and Me takes us from St. Louis, where both men grew up, to New York, where both men lived, to Malibu where Miles also kept a home. Troupe also takes us through the entire catalogue of Davis's recordings. Troupe calls his friend "irascible, contemptuous, brutally honest, ill-tempered when things didn't go his way, complex, fair-minded, humble, kind, and a son-of-a-bitch." The author's love and appreciation infuses Miles and Me with a rare quality of grace, and at the same time, throughout the book, Troupe's observations of his friend are keen, sometimes hilariously funny, and truthful, as he knows Miles would want him to be.

Other Editions - Miles And Me by Quincy Troupe 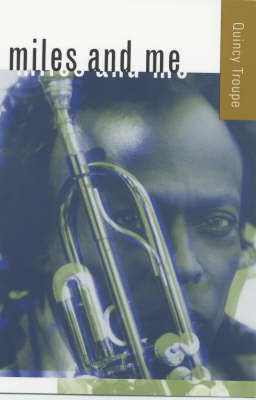 Book Reviews - Miles And Me by Quincy Troupe

» Have you read this book? We'd like to know what you think about it - write a review about Miles And Me book by Quincy Troupe and you'll earn 50c in Boomerang Bucks loyalty dollars (you must be a Boomerang Books Account Holder - it's free to sign up and there are great benefits!)

Poet, teacher, journalist Quincy Troupe is an alumnus of the Watts Writers Workshop and, along with his friends Ishmael Reed, Amiri Baraka, Nikki Giovanni and others, associated with the Black Arts Movement. He was named California's first poet laureate in 2002. Troupe's Miles- The Autobiography is considered a contemporary classic of musical artist biography. Among his many other books are his collaboration on the autobiography of Chris Gardner, The Pursuit of Happyness, which became a popular film starring Will Smith. He also wrote James Baldwin- The Legacy and Earl the Pearl- My Story by Earl Monroe and Quincy Troupe. Troupe has published many volumes of his poetry over the years and has also published several children's books.

A Preview for this title is currently not available.
More Books By Quincy Troupe
View All