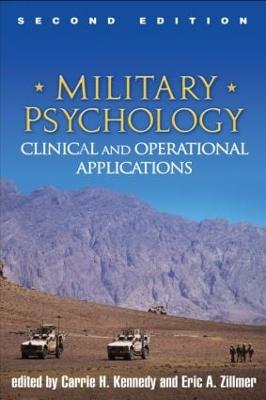 Widely regarded as the authoritative work in the field, this book comprehensively explores the psychological needs of today's service members and how to meet them effectively. Expert contributors review best practices for conducting fitness-for-duty evaluations and other types of assessments, treating frequently encountered clinical problems, responding to disasters, and promoting the health and well-being of all personnel. The book also examines the role of mental health professionals in enhancing operational readiness, with chapters on crisis and hostage negotiation, understanding terrorists, and more.

» Have you read this book? We'd like to know what you think about it - write a review about Military Psychology, Second Edition book by Carrie H. Kennedy and you'll earn 50c in Boomerang Bucks loyalty dollars (you must be a Boomerang Books Account Holder - it's free to sign up and there are great benefits!)

Carrie H. Kennedy, PhD, ABPP, is a Commander in the Medical Service Corps of the United States Navy and is the Group Psychologist for the Marine Corps Embassy Security Group in Quantico, Virginia. She has served at the Naval Medical Center in Portsmouth, Virginia; the National Naval Medical Center in Bethesda, Maryland; the United States Naval Hospital in Okinawa, Japan; the University of Virginia (Duty Under Instruction; Neuropsychology Fellowship); and the Naval Aerospace Medical Institute in Pensacola, Florida. Dr. Kennedy has deployed with the Detention Hospital in Guantanamo Bay and with the 1st Medical Battalion to Helmand Province, Afghanistan. She is a Fellow of the American Psychological Association (Division 19, Military Psychology) and the American Academy of Clinical Psychology. Dr. Kennedy is coeditor of the books Military Neuropsychology, Wheels Down: Adjusting to Life after Deployment, and Ethical Practice in Operational Psychology: Military and National Intelligence Applications and serves on the editorial boards of the journals Military Psychology and Psychological Services.Eric A. Zillmer, PsyD, is the Carl R. Pacifico Professor of Neuropsychology and Director of Athletics at Drexel University in Philadelphia. He is a clinical psychologist and a Fellow of the College of Physicians of Philadelphia, the American Psychological Association, the Society for Personality Assessment, and the National Academy of Neuropsychology, for which he has also served as president. Dr. Zillmer has written extensively in the areas of sports psychology, neuropsychology, and the psychology of terrorists. He is the author of several books, including Principles of Neuropsychology and The Quest for the Nazi Personality: A Psychological Investigation of Nazi War Criminals, and the coauthor of two psychological assessment procedures: the d2 Test of Attention and the Tower of London test.

A Preview for this title is currently not available.
More Books By Carrie H. Kennedy
View All