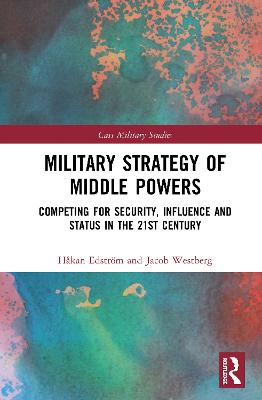 Military Strategy of Middle Powers: Competing for Security, Influence, and Status in the 21st Century

Description - Military Strategy of Middle Powers: Competing for Security, Influence, and Status in the 21st Century by Hakan Edstroem

Military Strategy of Middle Powers explores to what degree twenty-first-century middle powers adjust their military strategies due to changes in the international order, such as the decline in US power.

The overarching objective of the book is to explain continuity and change in the strategies of a group of middle powers during the twenty-first century. These strategies are described, compared, and explained through the lens of Realism. In order to find potential explanations for change or continuity within the cases, as well as for similarities and differences between the cases, the strategies of 11 'middle' powers are analysed (Canada, Germany, Italy, Spain, Australia, Brazil, Indonesia, South Africa, India, Japan, and South Korea). This group of countries are considered similar in several important aspects, primarily regarding relative power capacity. When searching for potential explanations for different strategic behaviours among the middle powers, their unique regional characteristics are a key focus and, consequently, the impact of the structure and polarity, as well as the patterns of amity and enmity, of the regional context are analysed. The empirical investigation is focused on security strategies used since the terrorist attacks 9/11 2001, which was one of the first major challenges to US hegemony.

This book will be of much interest to students of military and strategic studies, foreign policy, and International Relations in general.

Book Reviews - Military Strategy of Middle Powers: Competing for Security, Influence, and Status in the 21st Century by Hakan Edstroem

» Have you read this book? We'd like to know what you think about it - write a review about Military Strategy of Middle Powers: Competing for Security, Influence, and Status in the 21st Century book by Hakan Edstroem and you'll earn 50c in Boomerang Bucks loyalty dollars (you must be a Boomerang Books Account Holder - it's free to sign up and there are great benefits!)


A Preview for this title is currently not available.
More Books By Hakan Edstroem
View All