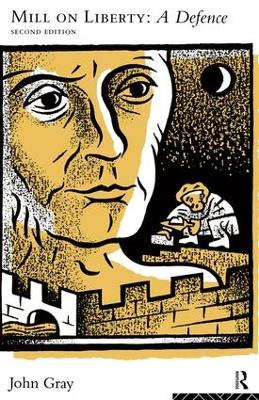 Mill on Liberty: A Defence

Description - Mill on Liberty: A Defence by John Gray

Mill on Liberty was first published in 1983 and has become a classic of Mill commentary. The second edition reproduces the text of the first in full, and in paperback for the first time. To this, John Gray adds an extensive postscript which defends the interpretation of Mill set out in the first edition, but develops radical criticisms of the substance of Millian and other liberalism.
The new edition is intended as a contribution to the current debate about the foundations of liberalism, and it looks closely at the recent seminal contributions to liberal thought by Raz, Feinberg, Rawls and Berlin. Central to its argument is Gray's contention that, like other liberalisms that ground themselves on an ideal of autonomy or individuality, Millian liberalism has a Eurocentric bias that cannot be given rational justification. Gray addresses the question of whether any form of liberal theory, can, in fact, avoid the bias, and concludes that it cannot.
This book will be indispensable both to those familiar with On Liberty and to those coming to it for the first time. In addition, the book will also be of great interest to moral and political theorists, to students of law and jurisprudence and to intellectual historians.

Other Editions - Mill on Liberty: A Defence by John Gray Book Reviews - Mill on Liberty: A Defence by John Gray

» Have you read this book? We'd like to know what you think about it - write a review about Mill on Liberty: A Defence book by John Gray and you'll earn 50c in Boomerang Bucks loyalty dollars (you must be a Boomerang Books Account Holder - it's free to sign up and there are great benefits!)


A Preview for this title is currently not available.
More Books By John Gray
View All