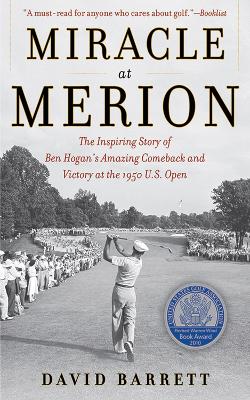 The Inspiring Story of Ben Hogan's Amazing Comeback and Victory at the 1950 U.S. Open

Legendary sportswriter Red Smith characterized Ben Hogan's comeback from a near-fatal automobile crash in February 1949 as "the most remarkable feat in the history of sports." Nearly sixty years later, that statement still rings true. The crowning moment of Hogan's comeback was his dramatic victory in the 1950 U.S. Open at Merion Golf Club near Philadelphia, where his battered legs could barely carry him on the 36-hole final day. Miracle at Merion tells the stirring story of Hogan's triumph over adversity-the rarely-performed surgery that saved his life, the months of rehabilitation when he couldn't even hit a golf ball, his stunning return to competition at the Los Angeles Open, and, finally, the U.S. Open triumph that returned him to the pinnacle of the game.
While Hogan was severely injured in the accident, fracturing his pelvis, collarbone, rib, and ankle, his life wasn't in danger until two weeks later when blood clots developed in his leg, necessitating emergency surgery. Hogan didn't leave the hospital until April and didn't even touch a golf club until August. It wasn't until November, more than nine months after the accident, that he was able to go to the range to hit balls. Hogan's performance at the Los Angeles Open in early January convinced Hollywood to make a movie out of his life and comeback (Follow the Sun, starring Glenn Ford). Five months later, Hogan completed his miraculous comeback by winning the U.S. Open in a riveting 36-hole playoff against Lloyd Mangrum and George Fazio, permanently cementing his legacy as one of the sport's true legends.

Other Editions - Miracle at Merion by David Barrett » Have you read this book? We'd like to know what you think about it - write a review about Miracle at Merion book by David Barrett and you'll earn 50c in Boomerang Bucks loyalty dollars (you must be a Boomerang Books Account Holder - it's free to sign up and there are great benefits!)


A Preview for this title is currently not available.
More Books By David Barrett
View All