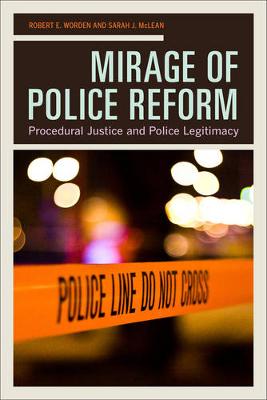 In the United States, the exercise of police authority-and the public's trust that police authority is used properly-is a recurring concern. Contemporary prescriptions for police reform hold that the public would better trust the police and feel a greater obligation to comply and cooperate if police-citizen interactions were marked by higher levels of procedural justice by police.

In this book, Robert E. Worden and Sarah J. McLean argue that the procedural justice model of reform is a mirage. From a distance, procedural justice seemingly offers a relief from strained police-community relations. But a closer look at police organizations and police-citizen interactions shows that the relief offered by such reform is, in fact, illusory.

» Have you read this book? We'd like to know what you think about it - write a review about Mirage of Police Reform book by Prof. Robert E. Worden and you'll earn 50c in Boomerang Bucks loyalty dollars (you must be a Boomerang Books Account Holder - it's free to sign up and there are great benefits!)