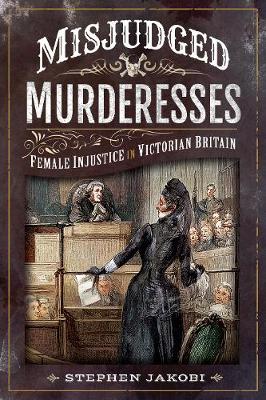 Lacing tea with poison and slipping arsenic in to soup, this is what comes to mind we talk of murderesses of the Victorian age. Fuelled by a rumour-driven press and cases of notorious killers like Marry Ann Cotton, the Angel of Death , or Christiana Edmunds, the Chocolate Cream Killer , death by poisoning was a great anxiety of Victorian Britain. But what about those women who were wrongly convicted? What about the suspects who fell victim of a biased jury and unrelenting press? In Misjudged Murderesses, Stephen Jakobi takes a forensic approach to examine the trials of six women falsely sentenced for crimes they didn t commit. With the aid of primary sources, and in two cases the ready assistance of descendants and local journalists, the validity of their convictions is questioned. Highlighting common factors in poisoning cases that led to ostensible miscarriages of justice, Jakobi shines a light on a flawed and inconsistent legal system. AUTHOR: After Cambridge, Stephen Jakobi began a career in industry. His strong belief in justice led him to become a solicitor, working in private practice. In 1992 he founded the Human Rights organisation Fair Trials International and was adviser to the European institutions on subjects ranging from Guantanamo to the European arrest warrant. He was awarded an OBE in 2005. Author of 'In the Mind of a Female Serial Killer (2017), Misjudged Murderesses is his second book. 20 b/w illustrations

» Have you read this book? We'd like to know what you think about it - write a review about Misjudged Murderesses: Female Injustice in Victorian Britain book by Jakobi, Stephen and you'll earn 50c in Boomerang Bucks loyalty dollars (you must be a Boomerang Books Account Holder - it's free to sign up and there are great benefits!)


A Preview for this title is currently not available.
More Books By Jakobi, Stephen
View All