Mission Survival 5: Claws of the Crocodile

Description - Mission Survival 5: Claws of the Crocodile by Bear Grylls

Beck Granger goes Down Under, in the fifth book in this exciting adventure series from survival specialist Bear Grylls.

A gripping Australian adventure story from Bear Grylls, packed with real survival details and dangers at every turn!

When Beck Granger follows a mysterious clue to the town of Broome in Northern Australia, it is just the beginning of an adventure that will force him into some of his toughest survival challenges yet!

The search for clues takes Beck into the heart of the Outback, where he must battle raging storms, ravenous crocodiles, cunning villains and a secret that may link back to the death of his parents many years ago . . .

Other Editions - Mission Survival 5: Claws of the Crocodile by Bear Grylls 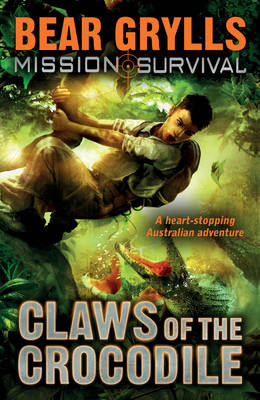 » Have you read this book? We'd like to know what you think about it - write a review about Mission Survival 5: Claws of the Crocodile book by Bear Grylls and you'll earn 50c in Boomerang Bucks loyalty dollars (you must be a Boomerang Books Account Holder - it's free to sign up and there are great benefits!)