My Vision for Space Exploration

Legendary "space statesman" Buzz Aldrin speaks out as a vital advocate for the continuing quest to push the boundaries of the universe as we know it. As a pioneering astronaut who first set foot on the moon during mankind's first landing of Apollo 11--and as an aerospace engineer who designed an orbital rendezvous technique critical to future planetary landings--Aldrin has a vision, and in this book he plots out the path he proposes, taking humans to Mars by 2035. Foreword by Andrew Aldrin hapter 1- The View from Air Force One hapter 2- Time for Decision-making hapter 3- Your Space- Building the Business Case hapter 4- Dreams of My Moon hapter 5- Voyage to Armageddon hapter 6- The March to Mars hapter 7- Homesteading the Red Planet hapter 8- The Clarion Call

Other Editions - Mission to Mars by Buzz Aldrin 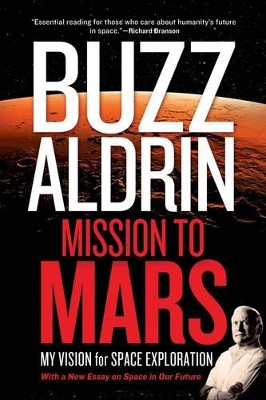 » Have you read this book? We'd like to know what you think about it - write a review about Mission to Mars book by Buzz Aldrin and you'll earn 50c in Boomerang Bucks loyalty dollars (you must be a Boomerang Books Account Holder - it's free to sign up and there are great benefits!)

BUZZ ALDRIN, best known for his Apollo 11 moonwalk, holds a doctorate degree in astronautics and, at the age of 82, continues to wield influence as an international advocate of space science and planetary exploration. He has written three nonfiction books, two science fact/fiction novels, and two children's books. Co-author LEONARD DAVID is a veteran space journalist and winner of the 2010 National Space Club Press Award.

A Preview for this title is currently not available.
More Books By Buzz Aldrin
View All