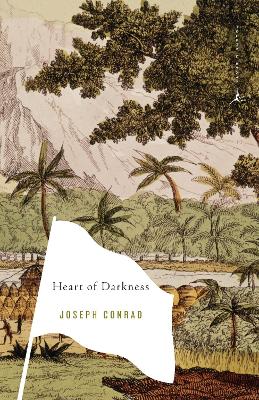 Heart of Darkness and Selections from The Congo Diary

With an Introduction by Caryl PhillipsCommentary by H.L. Mencken, E.M. Forster, Virginia Woolf, Ernest Hemingway, Bertrand Russell, Lionel Trilling, Chiua Achebe, and Philip Gourevitch"Heart of Darkness," which appeared at the very beginning of our century, was a Cassandra cry announcing the end of Victorian Europe, on the verge of transforming itself into the Europe of violence," wrote the critic Czeslaw Milosz.Originally published in 1902, Heart of Darkness remains one of this century's most enduring--and harrowing--works of fiction. Written several years after Conrad's grueling sojourn in the Belgian Congo, the novel tells the story of Marlow, a seaman who undertakes his own journey into the African jungle to find the tormented white trader Kurtz. Rich in irony and spellbinding prose, Heart of Darkness is a complex meditation on colonialism, evil, and the thin line between civilization and barbarity. This edition contains selections from Conrad's Congo Diary of 1890--the first notes, in effect, for the novel which was composed at the end of that decade.Virginia Woolf wrote of Conrad, "His books are full of moments of vision. They light up a whole character in a flash. . . . He could not write badly, one feels, to save his life."

» Have you read this book? We'd like to know what you think about it - write a review about Mod Lib Heart Of Darkness book by Joseph Conrad and you'll earn 50c in Boomerang Bucks loyalty dollars (you must be a Boomerang Books Account Holder - it's free to sign up and there are great benefits!)

Jospeh Conrad (1957-1924) grew up amid political unrest in Russian-occupied Poland. After twenty years at sea with the French and British merchant navies, he settled in England in 1894. Over the next three decades he revolutionized the English novel with works such as Typhoon (1902), Youth (1902), Nostromo (1904), The Secret Agent (1907), Under Western Eyes (1911), Chance (1913), and Victory (1915). Caryl Phillips is the author of many works of fiction and nonfiction. His novel A Distant Shore won the Commonwealth Writers' Prize and was a finalist for the PEN/Faulkner Award. His other awards include the Martin Luther King Memorial Prize, a Guggenheim Fellowship, and the James Tait Black Memorial Prize. Phillips is a Fellow of the Royal Society of Literature and lives in New York City.