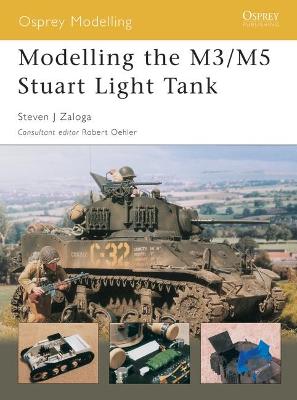 The M3 and M5 Stuart were the most significant light tanks of the US Army, as well as many other allied armies, during World War II. They have proved to be popular modelling subjects ever since, largely due to the large number of kits available in many different scales covering a broad selection of the different variants used. The Stuarts were also painted in a wide range of colourful camouflage schemes, reflecting their widespread service, and this adds to their appeal. This title shows a number of different ways to model this popular tank in 1/35 scale, covering construction, painting and weathering the vehicle.

» Have you read this book? We'd like to know what you think about it - write a review about Modelling the M3/M5 Stuart Light Tank book by Steven J. Zaloga and you'll earn 50c in Boomerang Bucks loyalty dollars (you must be a Boomerang Books Account Holder - it's free to sign up and there are great benefits!)

Steven J. Zaloga was born in 1952, received his BA in history from Union College, and his MA from Columbia University. He has published numerous books and articles dealing with modern military technology, especially armoured vehicle development His main area of interest is military affairs in the former Soviet Union and Eastern Europe in the Second World War, and he has also written extensively on American armoured forces.