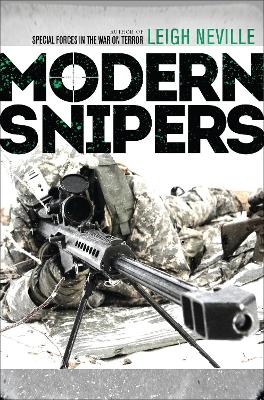 The years since 9/11 have seen major changes in the way snipers are employed on the modern battlefield, alongside an incredibly rapid evolution in their weapons, equipment and training. This book covers the 14 years of near-constant warfare since the dawn of the 21st century, documenting where, when and how snipers have been deployed; their rifles, optics and their ancillary equipment such as laser range finders; their training and tactics and accounts of real-life operations involving sniper teams.

The wars in Iraq and Afghanistan have reaffirmed the importance of snipers in both conventional and unconventional warfare, and this new study covers these developments in depth, as well as looking at the role of the sniper in police and counterterrorism environments.

» Have you read this book? We'd like to know what you think about it - write a review about Modern Snipers book by Leigh Neville and you'll earn 50c in Boomerang Bucks loyalty dollars (you must be a Boomerang Books Account Holder - it's free to sign up and there are great benefits!)

Leigh Neville is an Australian national who has written a number of books on both modern conventional military units and special operations forces serving in Afghanistan and Iraq, their weapons and their vehicles, including six titles for Osprey with several more in development. He has also consulted on military topics for several wargame companies and television documentary makers. He lives in Sydney with his wife and two dogs. He can be contacted via his website at www.leighneville.com.