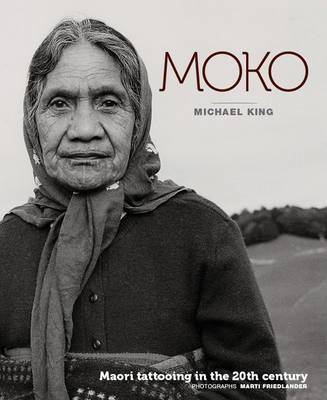 Moko is written by Michael King, one of New Zealand's most celebrated historians, and photographed by Marti Friedlander, one of the country's most eminent photographers. One of New Zealand's iconic books, originally published in 1972, it was a milestone in New Zealand publishing. Maori subject matter was not thought to be of interest to the New Zealand public at that time, and the author and photographer were relative unknowns Moko was their first book. To research this book, King and Friedlander travelled thousands of kilometres through the hinterland of New Zealand to find and speak with those who were tattooed, or with people who had first-hand knowledge of the custom. It is also the story of the last generation of Maori women who wore the traditional moko. Marti Friedlander's photographs illustrate with skill and compassion the moko itself, the women who wore it and the environments in which they lived.

» Have you read this book? We'd like to know what you think about it - write a review about Moko: Maori Tattooing in the 20th Century book by Michael King and you'll earn 50c in Boomerang Bucks loyalty dollars (you must be a Boomerang Books Account Holder - it's free to sign up and there are great benefits!)


A Preview for this title is currently not available.
More Books By Michael King
View All

Mind Captures: A Man's Search to Bring Meaning to His Life and the Lives of Others by Writing Ninety-Nine Poems, Short Stories, and Essays
$49.42 $54.91