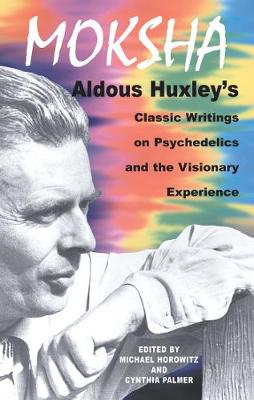 Aldous Huxley's Classic Writings on Psychedelics and the Visionary Experience

Selected writings from the author of Brave New World and The Doors of Perception on the role of psychedelics in society.

In May 1953 Aldous Huxley took four-tenths of a gram of mescaline. The mystical and transcendent experience that followed set him off on an exploration that was to produce a revolutionary body of work about the inner reaches of the human mind. Huxley was decades ahead of his time in his anticipation of the dangers modern culture was creating through explosive population increase, headlong technological advance, and militant nationalism, and he saw psychedelics as the greatest means at our disposal to "remind adults that the real world is very different from the misshapen universe they have created for themselves by means of their culture-conditioned prejudices." Much of Huxley's writings following his 1953 mescaline experiment can be seen as his attempt to reveal the power of these substances to awaken a sense of the sacred in people living in a technological society hostile to mystical revelations.

Moksha, a Sanskrit word meaning "liberation," is a collection of the prophetic and visionary writings of Aldous Huxley. It includes selections from his acclaimed novels Brave New World and Island, both of which envision societies centered around the use of psychedelics as stabilizing forces, as well as pieces from The Doors of Perception and Heaven and Hell, his famous works on consciousness expansion.

» Have you read this book? We'd like to know what you think about it - write a review about Moksha book by Aldous Huxley and you'll earn 50c in Boomerang Bucks loyalty dollars (you must be a Boomerang Books Account Holder - it's free to sign up and there are great benefits!)

Michael Horowitz and Cynthia Palmer are the directors of the Fitz Hugh Ludlow Memorial Library in San Francisco, the only library in the world devoted exclusively to the literature of mind-altering drugs. Michael Horowitz was Timothy Leary's archivist and is coauthor of The High Times Encyclopedia of Recreational Drugs. Palmer and Horowitz live in northern California.

A Preview for this title is currently not available.
More Books By Aldous Huxley
View All