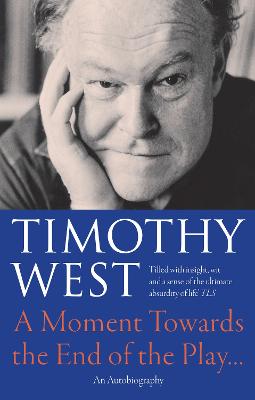 A Moment Towards the End of The Play

A revised and expanded edition of the autobiography that has delighted readers and theatregoers since its first publication in 2001.

Known - and loved - for his many TV appearances in Brass and as the embodiment of Edward VII, Thomas Beecham and Winston Churchill, Timothy West has led a charmed life as an actor, moving effortlessly between TV and stage, film and radio recordings. With his wife, Prunella Scales, and his son, Samuel, he and his family have been responsible for much of the best that stage and screen have had to offer in recent years.

'A theatrical memoir that doesn't cloy, and is filled with insight, wit and a sense of the ultimate absurdity of life' Judith Flanders, TLS

Buy A Moment Towards the End of The Play by Timothy West from Australia's Online Independent Bookstore, Boomerang Books.

» Have you read this book? We'd like to know what you think about it - write a review about Moment Towards the End of The Play book by Timothy West and you'll earn 50c in Boomerang Bucks loyalty dollars (you must be a Boomerang Books Account Holder - it's free to sign up and there are great benefits!)

TIMOTHY WEST is best-known on TV for Brass and for roles such as Edward VII, Churchill and Sir Thomas Beecham. He has recently been seen on stage as Arthur Winslow in Terence Rattigan's The Winslow Boy and on television as Sir Leicester Dedlock in the BBC's Bleak House. Classic stage roles include Lear, Prospero, Falstaff and the Master Builder. He was awarded a CBE for his services to drama in 1984 and is president of LAMDA. He lives in Wandsworth with his wife, Prunella Scales.

A Preview for this title is currently not available.
More Books By Timothy West
View All