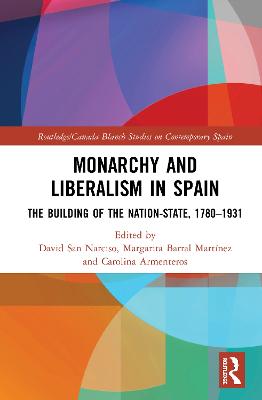 Monarchy and Liberalism in Spain: The Building of the Nation-State, 1780-1931

Description - Monarchy and Liberalism in Spain: The Building of the Nation-State, 1780-1931 by David San Narciso

Bringing together the work of top specialists and emerging scholars in the field, this volume is the first book-length study of the rapport between liberalism and the Spanish monarchy over the long nineteenth century in any language.

It is at once a general overview and a set of original contributions to knowledge. The essays discuss monarchy's rapport with the pre-liberal, liberal and post-liberal nation-state, from the eve of the French Revolution, when the monarchy regulated a 'natural' order, to the unstable reign of Isabel II, fraught by revolutions that ended in her exile, to the brief republican monarchy of Amadeo I, the much-maligned foreign king, to Alfonso XIII's expulsion from Spain following the failure of the dictatorship of Primo de Rivera. The essays approach the subject through two main thematic-analytical axes. The first, political axis examines the monarchy's confrontation with, and adaptation to, liberalism as a political force that aimed to nationalize the Spanish people. The second axis is cultural, and studies the Crown's support of liberalism's nationalizing aims through various staging strategies that comprised visits, rituals, ceremonies, iconography, religiosity, and familial and military display. The dual approach invites the reader to question the boundaries between the political and the cultural, especially in regard to the ceremonial, and during critical times that witness the transformation of political power and the building of the nation-state.

Designed for Hispanists and students of politics, ritual, liberalism and monarchy, this collection should appeal to academics and researchers as well as anyone interested in modern European history.

Buy Monarchy and Liberalism in Spain: The Building of the Nation-State, 1780-1931 by David San Narciso from Australia's Online Independent Bookstore, Boomerang Books.

Book Reviews - Monarchy and Liberalism in Spain: The Building of the Nation-State, 1780-1931 by David San Narciso

» Have you read this book? We'd like to know what you think about it - write a review about Monarchy and Liberalism in Spain: The Building of the Nation-State, 1780-1931 book by David San Narciso and you'll earn 50c in Boomerang Bucks loyalty dollars (you must be a Boomerang Books Account Holder - it's free to sign up and there are great benefits!)