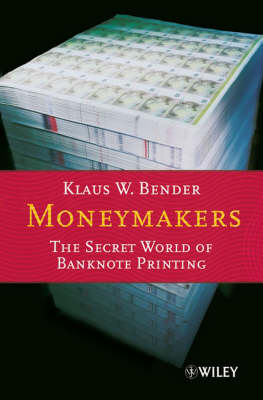 This book is about the most precious piece of paper we know, about
bank-notes. Modern life would be unthinkable without them. Yet, the
general public is kept very much in the dark about how they are
made or who makes them. It is rarely known, for example, that
despite America's technical Prowess all dollar bills are printed
exclusively on German high-security printing presses using secret
Swiss special inks, or that the phony 100 dollar bills, the
so-called supernotes may well be printed in a top-secret printing
works located just north of the white House and run by the CIA -
although the US government is blaming the rogue government of North
Korea for counterfeiting these bills. This book is finally lifting
the veil on an industry used to absolute secrecy. It recounts the
stories of a British banknote printer who, fearing the loss of his
customer, informed the Egyptian secret service that the securities
printing machinery the Egyptians were about to buy was of Jewish
origin; of a private printer who convinced the Polish central bank
that it should destroy a complete series of new, perfect banknotes
which had been printed by a competitor, or of an Argentinean
high-security printer who came to print genuine fake bank-notes for
Zaire and Bahrain as a result of two sting operations, which smell
of the Belgian and French secret service.
Moneymakers, by offering a detailed view of the banknote
industry and its modus operandi, removes the industry's carefully
imposed shroud of secrecy. This book has been researched over a
five-year period in Europe, the USA, and Latin America. The book is
based exclusively on personal Interviews and confidential mate4rial
normally not accessible to outsiders. There were attempts to stop
this research project.
Klaus W. Bender has peered behind the scenes of the Secret and
exclusive world of the moneymakers. - Financial Times Deutschland,
2004
The errors and pitfalls at the birth of the euro make Bender's
research so unnerving. - Suddeutsche Zeitung, 2004
Bender does not mince his words when he describes abuses - and
there are lots of them. - Neue Zurcher Zeitung, 2004

» Have you read this book? We'd like to know what you think about it - write a review about Moneymakers book by Klaus W. Bender and you'll earn 50c in Boomerang Bucks loyalty dollars (you must be a Boomerang Books Account Holder - it's free to sign up and there are great benefits!)

Klaus W. Bender is an economist and journalist with 30 years experience as a foreign correspondent for the "Frankfurter Allgemeine Zeitung" (FAZ), Germany's leading daily paper. From an office in Tokyo, he has covered East Asia; from Rome, the Mediterranean basin; from Vienna, the Eastern European countries in transition. Further, in the run-up to the birth of the euro, since the 1990's he has been investigating the situation of the banknote industry and its problems. As a result, in the year 2000 he discovered and broke the story of the misprinting of more than 300 million 100-euro bills by the officially appointed printer in Germany. The story went around the world. Additionally, he was the first journalist to report on the unfolding economic difficulties of the Bundesdruckerei in Berlin, the then highly respected state printing plant of the DM bills, as it was about to be privatized.