Also known as Journey to the West, Wu Ch'ang-an's Monkey is one of the Four Great Classical Novels in Chinese literature, translated by Arthur Waley in Penguin Classics.
Monkey depicts the adventures of Prince Tripitaka, a young Buddhist priest on a dangerous pilgrimage to India to retrieve sacred scriptures accompanied by his three unruly disciples- the greedy pig creature Pipsy, the river monster Sandy - and Monkey. Hatched from a stone egg and given the secrets of heaven and earth, the irrepressible trickster Monkey can ride on the clouds, become invisible and transform into other shapes - skills that prove very useful when the four travellers come up against the dragons, bandits, demons and evil wizards that threaten to prevent them in their quest. Wu Ch'ang-an wrote Monkey in the mid-sixteenth century, adding his own distinctive style to an ancient Chinese legend, and in so doing created a dazzling combination of nonsense with profundity, slapstick comedy with spiritual wisdom.
Arthur Waley's humorous and energetic translation is accompanied by an introduction discussing the story's background in history and legend, its elements of anti-bureaucratic satire and the allegorical nature of its characters
Very little is known about Wu Ch'ang-an (c.1505-80) although he is believed to have held the post of District Magistrate for a time. He had a reputation as a good poet but only a few rather commonplace verses of his survive in an anthology of Ming poetry and in a local gazetteer.
If you enjoyed Monkey, you might like Confucius's The Analects, also available in Penguin Modern Classics.

Other Editions - Monkey by Wu Ch'eng-En 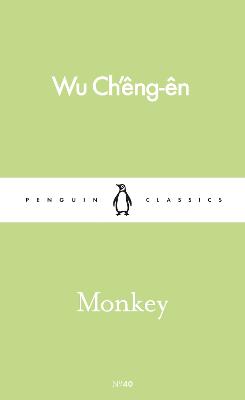 » Have you read this book? We'd like to know what you think about it - write a review about Monkey book by Wu Ch'eng-En and you'll earn 50c in Boomerang Bucks loyalty dollars (you must be a Boomerang Books Account Holder - it's free to sign up and there are great benefits!)