Having discovered the monstrous secret of his origins, Archie Dent is no longer certain that he is worthy to be a member of the League of Seven. But with new enemies to face, he realizes that he may not have the luxury of questioning his destiny.

Wielding the Dragon Lantern, the maniacal Philomena Moffett has turned her back on the Septemberist Society, creating her own Shadow League and unleashing a monster army on the American continent. Archie and his friends must race to find the last two members of their league in time to thwart Moffett's plan and rescue humanity once more.

Other Editions - The Monster War by Alan Gratz 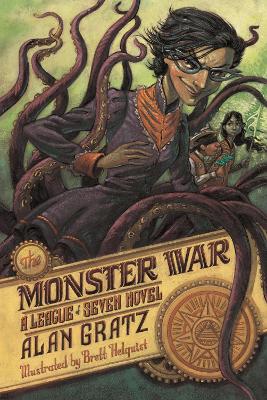 » Have you read this book? We'd like to know what you think about it - write a review about Monster War book by Alan Gratz and you'll earn 50c in Boomerang Bucks loyalty dollars (you must be a Boomerang Books Account Holder - it's free to sign up and there are great benefits!)

ALAN GRATZ is the author of the League of Seven series, Samurai Shortstop, and Prisoner B-3087. He began writing The League of Seven, winner of the Southern Independent Booksellers Alliance Young Adult Book Award, by listing all the things that ten-year-old Alan would have thought were awesome, including brass goggles, airships, tentacled monsters, brains in jars, windup robots, secret societies, and super powers. (In fact, he still thinks all those things are awesome.) He lives in North Carolina with his wife and daughter.