Monsters in Greek literature are often thought of as creatures which exist in mythological narratives, however, as this book shows, they appear in a much broader range of ancient sources and are used in creation narratives, ethnographic texts, and biology to explore the limits of the human body and of the human world.

This book provides an in-depth examination of the role of monstrosity in ancient Greek literature. In the past, monsters in this context have largely been treated as unimportant or analysed on an individual basis. By focusing on genres rather than single creatures, the book provides a greater understanding of how monstrosity and abnormal bodies are used in ancient sources. Very often ideas about monstrosity are used as a contrast against which to examine the nature of what it is to be human, both physically and behaviourally. This book focuses on creation narratives, ethnographic writing, and biological texts. These three genres address the origins of the human world, its spatial limits, and the nature of the human body; by examining monstrosity in these genres we can see the ways in which Greek texts construct the space and time in which people exist and the nature of our bodies.

This book is aimed primarily at scholars and students undertaking research, not only those with an interest in monstrosity, but also scholars exploring cultural representations of time (especially the primordial and mythological past), ancient geography and ethnography, and ancient philosophy and science. As the representation of monsters in antiquity was strongly influential on medieval, renaissance, and early modern images and texts, this book will also be relevant to people researching these areas. 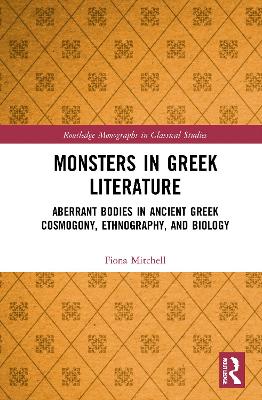 » Have you read this book? We'd like to know what you think about it - write a review about Monsters in Greek Literature: Aberrant Bodies in Ancient Greek Cosmogony, Ethnography, and Biology book by Fiona Mitchell and you'll earn 50c in Boomerang Bucks loyalty dollars (you must be a Boomerang Books Account Holder - it's free to sign up and there are great benefits!)


A Preview for this title is currently not available.
More Books By Fiona Mitchell
View All

The Swap: The gripping and addictive novel that everyone is talking about
$31.67 $35.19