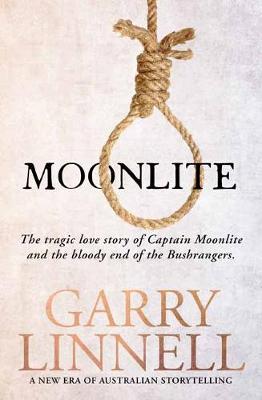 Moonlite: The Tragic Love Story of Captain Moonlite and the Bloody End of the Bushrangers

Description - Moonlite: The Tragic Love Story of Captain Moonlite and the Bloody End of the Bushrangers by Garry Linnell

A gay bushranger with a love of poetry and guns. A grotesque hangman with a passion for flowers and gardening.
A broken young man desperate for love and respect. These men - two of them lovers - are about to bring the era of
Australia's outlaws to a torrid and bloody climax. Moonlite is the true and epic story of George Scott, an Irish-born
preacher who becomes, along with Ned Kelly, one of the nation's most notorious and celebrated criminals.

"Linnell recounts with gusto Scott's early forays in the Pacific and leads the reader into tales of his robbery in the goldfields, capture, escape, recapture and then prison romance." The Canberra Times

Charismatic, intelligent and handsome, George Scott was born into a privileged life in famine-wracked Ireland. His family lost its fortune and fled to New Zealand. There, Scott joins the local militia and after recovering from gunshot wounds, sails to Australia.

One night he dons a mask in a small country town, arms himself with a gun and, dubbing himself Captain Moonlite, brazenly robs a bank before staging one of the country's most audacious jailbreaks. After falling in love with fellow prisoner James Nesbitt, a boyish petty criminal desperately searching for a father figure, Scott finds himself unable to shrug off his criminal past. Pursued and harassed by the police, he stages a dramatic siege and prepares for a final showdown with the law - and a macabre executioner without a nose.

Told at a cracking pace, and based on many of the extensive letters Scott wrote from his death cell, Moonlite is set amid the violent and sexually-repressed era of Australia in the second half of the 19th century.

Buy Moonlite: The Tragic Love Story of Captain Moonlite and the Bloody End of the Bushrangers by Garry Linnell from Australia's Online Independent Bookstore, Boomerang Books.

Book Reviews - Moonlite: The Tragic Love Story of Captain Moonlite and the Bloody End of the Bushrangers by Garry Linnell

» Have you read this book? We'd like to know what you think about it - write a review about Moonlite: The Tragic Love Story of Captain Moonlite and the Bloody End of the Bushrangers book by Garry Linnell and you'll earn 50c in Boomerang Bucks loyalty dollars (you must be a Boomerang Books Account Holder - it's free to sign up and there are great benefits!)


A Preview for this title is currently not available.
More Books By Garry Linnell
View All