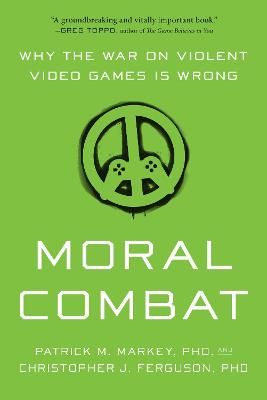 Why the War on Violent Video Games Is Wrong

In family rooms across America, millions of children and teenagers are playing video games, such as Call of Duty, Halo, and Grand Theft Auto, roaming violent virtual worlds-with virtual guns in their hands.
In what sometimes seems like an increasingly violent world, it's only natural to worry about the effects of all this pixelated gore. But is that concern misplaced? Authors and psychologists Patrick M. Markey and Christopher J. Ferguson say it is.
The media and politicians have been sounding the alarm for years, and with every fresh tragedy involving a young perpetrator comes another flurry of articles about the dangers of violent media. The problem is this: Their fear isn't supported by the evidence. In fact, unlike the video game-trained murder machines depicted in the press, school shooters are actually less likely to be interested in violent games than their peers. In reality, most well-adjusted children and teenagers play violent video games, all without ever exhibiting violent behavior in real life. What's more, spikes in sales of violent games actually correspond to decreased rates of violent crime.
If that surprises you, you're not alone-the national dialogue on games and violence has been hopelessly biased. But that's beginning to change. Scholars are finding that not only are violent games not one of society's great evils, they may even be a force for good.
In Moral Combat, Markey and Ferguson explore how video games-even the bloodiest-can have a positive impact on everything from social skills to stress, and may even make us more morally sensitive. Tracing the rise of violent games from arcades to online deathmatches, they have spent years on the front lines of the video game debate and now offer a comprehensive overview of the scientific research on gaming. With humor, complete honesty, and extensive research, they separate the myth from the medium.
Moral Combat is an irreverent and informative guide to the worries-and wonders-of our violent virtual world.

» Have you read this book? We'd like to know what you think about it - write a review about Moral Combat book by Patrick M. Markey and you'll earn 50c in Boomerang Bucks loyalty dollars (you must be a Boomerang Books Account Holder - it's free to sign up and there are great benefits!)

Dr. Patrick Markey is a Professor of Psychology, the Director of the Interpersonal Research Laboratory at Villanova University, and a former President of the Society for Interpersonal Theory and Research. Dr. Patrick Markey received his doctorate from the University of California (Riverside) in social and personality psychology, with a focus on behavioral statistics. Since receiving his degree he has published over sixty book chapters and journal articles in peer-reviewed journals, and he has made hundreds of presentations at universities and at national and international scientific conferences. Among his peers, he is widely recognized as an expert on how violent video games affect our behavior, and he is regarded for being able to present complex statistical and behavioral data to a general audience in a way that is both informative and entertaining. For years Dr. Markey has been involved in educating the general public and politicians about various psychological issues related to digital media. By giving talks at universities and elementary schools he has been able to help parents, teachers, and school administrators better understand the complex research examining violent video games. Moving beyond the classroom, Dr. Markey has been invited to testify before numerous governmental committees, and he has served on various governmental task forces examining the effects of violent video games.Dr. Christopher Ferguson is is a professor of psychology at Stetson University. Alongside this book, he has also written a mystery novel, Suicide Kings. Dr. Ferguson received his doctorate from the University of Central Florida in clinical psychology. Dr. Ferguson's clinical work has focused on forensic psychology, including work with inmates, as well as juvenile detention and Child Protective Services assessments. Since receiving his degree he has published over one hundred book chapters and journal articles in peer-reviewed journals, and he has presented his research at numerous universities and scientific conferences. Along with Dr. Markey, he is internationally recognized as an expert on the topic of violent video game effects. Dr. Ferguson was part of the talks given by Vice President Biden's task force on gun control following the Sandy Hook shooting in 2012, and he also participated in the Institute of Medicine's hearings on the role of media violence in gun violence in 2013.