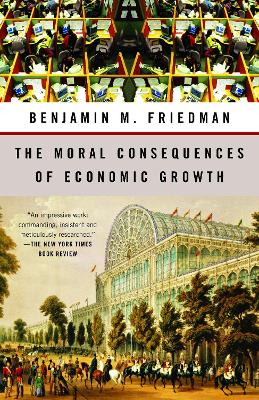 The Moral Consequences of Economic Growth

From the author of Day of Reckoning, the acclaimed critique of Ronald Reagan's economic policy ("Every citizen should read it," said The New York Times): a persuasive, wide-ranging argument that economic growth provides far more than material benefits.

In clear-cut prose, Benjamin M. Friedman examines the political and social histories of the large Western democracies-particularly of the United States since the Civil War-to demonstrate the fact that incomes on the rise lead to more open and democratic societies. He explains that growth, rather than simply a high standard of living, is key to effecting political and social liberalization in the third world, and shows that even the wealthiest of nations puts its democratic values at risk when income levels stand still. Merely being rich is no protection against a turn toward rigidity and intolerance when a country's citizens lose the sense that they are getting ahead.

With concrete policy suggestions for pursuing growth at home and promoting worldwide economic expansion, this volume is a major contribution to the ongoing debate about the effects of economic growth and globalization.

» Have you read this book? We'd like to know what you think about it - write a review about Moral Consequences of Economic Growth book by Benjamin M. Friedman and you'll earn 50c in Boomerang Bucks loyalty dollars (you must be a Boomerang Books Account Holder - it's free to sign up and there are great benefits!)

Benjamin M. Friedman is the William Joseph Maier Professor of Political Economy and former chairman of the department of economics at Harvard University, where he has taught since 1972. The author of several scholarly works; his first trade book, Day of Reckoning: The Consequences of American Economic Policy Under Reagan and After, was awarded the George S. Eccles Prize, awarded annually by Columbia University for excellence in writing about economics. A former investment banker, he has consulted for the Board of Governors of the Federal Reserve System and individual Federal Reserve banks. He has worked with the National Bureau of Economic Research, the National Science Foundation Subcommittee on Economics, and the Congressional Budget Office. Professor Friedman has written for the New York Times, The Wall Street Journal, and The New York Review of Books.

A Preview for this title is currently not available.
More Books By Benjamin M. Friedman
View All