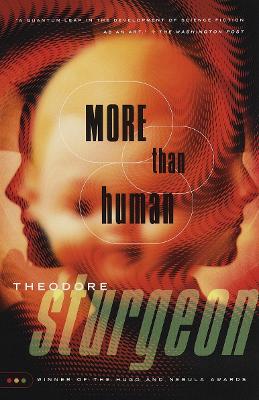 In this genre-bending novel--among the first to have launched sci-fi into the arena of literature--one of the great imaginers of the twentieth century tells a story as mind-blowing as any controlled substance and as affecting as a glimpse into a stranger's soul.

There's Lone, the simpleton who can hear other people's thoughts and make a man blow his brains out just by looking at him. There's Janie, who moves things without touching them, and there are the teleporting twins, who can travel ten feet or ten miles. There's Baby, who invented an antigravity engine while still in the cradle, and Gerry, who has everything it takes to run the world except for a conscience. Separately, they are talented freaks. Together, they compose a single organism that may represent the next step in evolution, and the final chapter in the history of the human race. As the protagonists of More Than Human struggle to find out who they are and whether they are meant to help humanity or destroy it, Theodore Sturgeon explores questions of power and morality, individuality and belonging, with suspense, pathos, and a lyricism rarely seen in science fiction.

Winner of the Hugo, Nebula, and International Fantasy Awards

Other Editions - More Than Human by Theodore Sturgeon 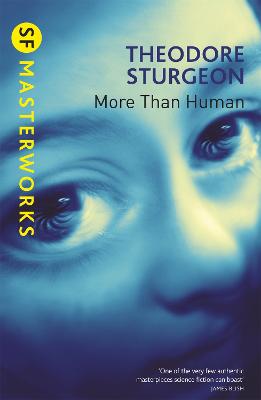 » Have you read this book? We'd like to know what you think about it - write a review about More Than Human book by Theodore Sturgeon and you'll earn 50c in Boomerang Bucks loyalty dollars (you must be a Boomerang Books Account Holder - it's free to sign up and there are great benefits!)

Theodore Sturgeon was born in Staten Island, New York in 1918. He lived in New York City, upstate New York, and Los Angeles. In addition to More Than Human, winner of the International Fantasy Award, he is the author of Venus Plus X; To Marry Medusa; The Dreaming Jewels; and numerous other books and stories. He won the Hugo and Nebula Awards for his short story "Slow Sculpture" and the World Fantasy Life Achievement Award. He died in Eugene, Oregon in 1985.

A Preview for this title is currently not available.
More Books By Theodore Sturgeon
View All