More Than Likely: A Memoir

Description - More Than Likely: A Memoir by Dick Clement

Dick Clement and Ian La Frenais are the creators of some of British television's most beloved comedies. Essex-born Clement teamed up with Geordie insurance salesman La Frenais in the early 1960s and scripted a series about two young pals from Newcastle, The Likely Lads, which became one of BBC Two's first hits. The duo went on to create the classic sitcoms Whatever Happened to the Likely Lads?, Porridge starring Ronnie Barker, and Auf Wiedersehen, Pet.Together and separately they have worked as writers and script editors for some of the most famous TV programmes ever made, and with stellar performers that include Billy Connolly and Tracey Ullman. Clement and La Frenais have been partners for more than five decades: longer than Rodgers and Hammerstein, Gilbert and Sullivan, Laurel and Hardy, and Morecambe and Wise. Their career has covered writing, directing and producing for movies and the theatre as well as for television. They have written comedy set in factories, prisons and building sites; drama set in shabby London streets and the corridors of power; musicals about bands coming together and bands breaking apart. Along the way they have had some memorable encounters with movie stars like Richard Burton, Ava Gardner and Marlon Brando; and with poets, prima donnas, politicians and rock stars. This is their story.

Other Editions - More Than Likely: A Memoir by Dick Clement 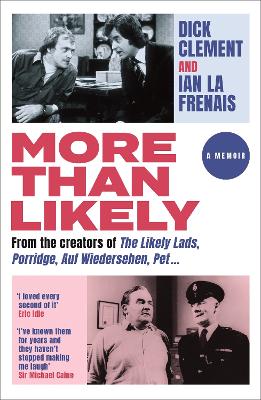 Book Reviews - More Than Likely: A Memoir by Dick Clement

» Have you read this book? We'd like to know what you think about it - write a review about More Than Likely: A Memoir book by Dick Clement and you'll earn 50c in Boomerang Bucks loyalty dollars (you must be a Boomerang Books Account Holder - it's free to sign up and there are great benefits!)


A Preview for this title is currently not available.
More Books By Dick Clement
View All