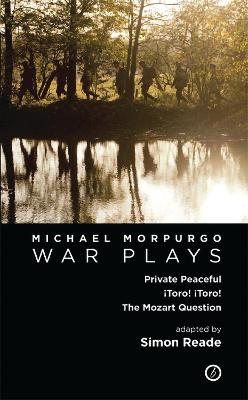 Three war plays by Michael Morpurgo, author of War Horse, dramatised by Simon Reade. Private Peaceful relives the short life of Tommo growing up in rural Devon before fighting the battles and facing the injustices of the First World War. In Toro! Toro! young Antonito liberates his favourite bull from the ritualised killing of the bullfight as he tries to escape the Spanish Civil War. In The Mozart Question Paolo Levi discovers the astonishing truth about his parents' flight to Venice from the gas chambers of the Second World War.

» Have you read this book? We'd like to know what you think about it - write a review about Morpurgo book by Simon Reade and you'll earn 50c in Boomerang Bucks loyalty dollars (you must be a Boomerang Books Account Holder - it's free to sign up and there are great benefits!)

The celebrated collaboration between children's author Michael Morpurgo and playwright and former RSC literary manager Simon Reade has also created the BBC radio play and the feature film of Private Peaceful, Polka Theatre's production of Twist of Gold, and the concert series that includes On Angel Wings. Simon's other plays include Pride & Prejudice, The Scarecrow and His Servant, Not the End of the World and, for the Royal Shakespeare Company, Midnight's Children and Tales from Ovid.

A Preview for this title is currently not available.
More Books By Simon Reade
View All