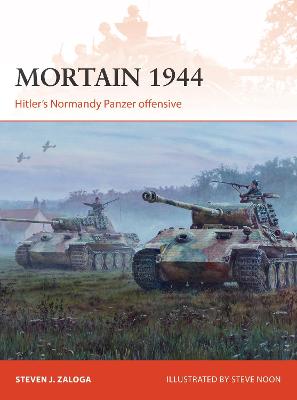 Following the successful landings in Normandy on D-Day and consolidation during Operation Cobra, the Wehrmacht was ordered to begin a counter-offensive named Operation Luttich.

The plan was to send a large Panzer force across the First US Army sector, cutting off its spearheads, and finally reach Avranches on the coast. Had this succeeded, it not only would have cut off the First US Army spearheads, but also Patton's newly deployed Third US Army operating in Brittany. However, thanks to an intercepted radio message, the Allies were well-prepared for the offensive and not only repelled the oncoming panzers, but went on a counter-attack that would lead to a whole German army becoming encircled in the Falaise Pocket.

Fully illustrated with stunning full-colour artwork, this book tells the story of Operation Luttich, the failed offensive which ended any prospect of Germany winning the battle of Normandy.

» Have you read this book? We'd like to know what you think about it - write a review about Mortain 1944: Hitler's Normandy Panzer offensive book by Steven J. Zaloga and you'll earn 50c in Boomerang Bucks loyalty dollars (you must be a Boomerang Books Account Holder - it's free to sign up and there are great benefits!)