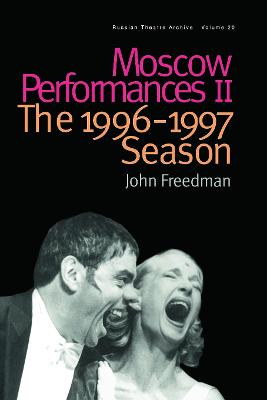 This is a collection of John Freedman's reviews and articles, most originally written for the Moscow Times, in which he focuses his expert critical eye on the directors, writers and actors who held centre stage during the 1996-97 theatre season in Moscow.
The book looks at the debut of promising new artists and directors at the Moscow Art Theatre celebrating its 100th anniversary this year and offers a wealth of insight into the latest developments in Russian theatre.
Freedman illuminates all of the season's noteworthy trends and events in clear, informed and unapologetically opinionated reports. More than just an overview of the stars and highlights, Moscow Performances II observes at close range the playhouses and the people who make up the ever-changing face of contemporary Russian theatre today.
This volume is generously illustrated with photographs of featured productions and will be a useful reference for students, professors, writers, directors and actors in the fields of Russian studies, theatre studies, theatre history and contemporary culture.

» Have you read this book? We'd like to know what you think about it - write a review about Moscow Performances II: The 1996-1997 Season book by John Freedman and you'll earn 50c in Boomerang Bucks loyalty dollars (you must be a Boomerang Books Account Holder - it's free to sign up and there are great benefits!)


A Preview for this title is currently not available.
More Books By John Freedman
View All

Argument in Favor of the Repeal of the Excise Law: Delivered in the Senate Chamber, at Albany, February 12, 1868, Before the Committee on Internal Affairs, Appointed by the Senate of the State of New York.
$34.71 $38.57