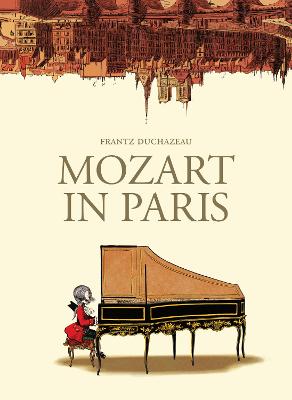 In 1778, Wolfgang Amadeus Mozart leaves Salzburg for Paris. The French capital promises to liberate the 22-year-old from the suffocating grip of his father, and from a city that is unable to accommodate his genius. But there is no grand entrance for the former child prodigy. When Mozart arrives in Paris, he is cash-strapped, unknown and his French is poor. His mentor, the critic Baron von Grimm, introduces him to a number of Parisian nobles. But recognition is hard-won, and at times the French court appears indifferent to Mozart's talents and disapproving of his spontaneity.

Tracing the composer's six-month stay in the city of lights, Mozart in Paris dramatizes the confrontation between a sparkle-eyed genius and mundane reality. Frantz Duchazeau spotlights a frustrating yet formative period of the composer's life - and in doing so creates a living, breathing portrait of a man whose music, as Einstein famously said, "was so pure that it seemed to have been ever-present in the universe, waiting to be discovered by the master."

» Have you read this book? We'd like to know what you think about it - write a review about Mozart in Paris book by Frantz Duchazeau and you'll earn 50c in Boomerang Bucks loyalty dollars (you must be a Boomerang Books Account Holder - it's free to sign up and there are great benefits!)


A Preview for this title is currently not available.
More Books By Frantz Duchazeau
View All