Leigh Hobbs is the Australian Children's Laureate for 2016-2017.

Mr Chicken has taken up his friend Yvette's invitation to visit Paris. As they journey together through the City of Love, Mr Chicken is overcome by the magic of all the city has to offer - and the inhabitants of this most stylish city don't quite know what to make of him. Mr Chicken is yet another unforgettable and riotous character from Leigh Hobbs who will delight children of all ages.


Other Editions - Mr Chicken Goes to Paris by Leigh Hobbs 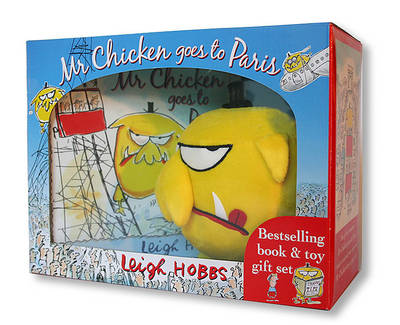 Leigh Hobbs has travelled for much of his adult life - and the times he has spent in Paris have been among his happiest. A lover of history and architecture, Mr Chicken Goes to Paris shows his delight in the city that has brought him so much joy. Leigh Hobbs is the bestselling author of more than 20 books, including the iconic Old Tom, Mr Chicken goes to Paris and Horrible Harriet. As an artist, he works across a range of mediums, as well as writing and illustrating his children's books. Mr Chicken goes to Paris was shortlisted for the 2010 Prime Minister's Literary awards and has been a constant best seller at the Louvre Museum Bookshop in Paris. Old Tom has been adapted into an extremely popular TV series. Leigh Hobbs was the Australian Children's Laureate for 2016-17. His subversive humour has delighted children for more than two decades. You can read more about Leigh at www.leighhobbs.com