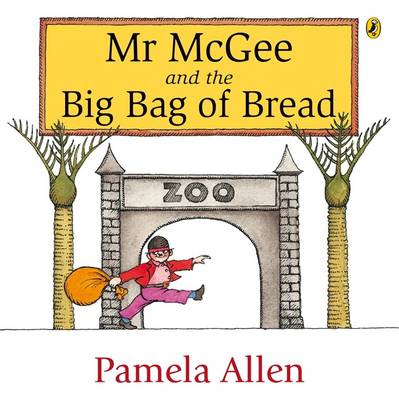 Mr Mcgee And The Big Bag Of Bread

Do not feed the animals, the notice board said. But Mr McGee had a big bag of bread. Share in the fun as Mr McGee sets out to feed the animals in the zoo, and meets one very hungry crocodile!

» Have you read this book? We'd like to know what you think about it - write a review about Mr Mcgee And The Big Bag Of Bread book by Pamela Allen and you'll earn 50c in Boomerang Bucks loyalty dollars (you must be a Boomerang Books Account Holder - it's free to sign up and there are great benefits!)

Mr McGee and the Big Bag of Bread is another excellent addition to the Mr McGee series.

Mr McGee decides that today he is going to go to the Zoo to feed the animals. So off he heads with his big bag of bread. Despite the sign's that say to not feed the animals, Me McGee does just that and he finds himself in all sorts of trouble.

Like the other Mr McGee books, that story is completely in rhythm and flows nicely and is allot of fun to read. The illustrations are similar to the other books. Worth a read.