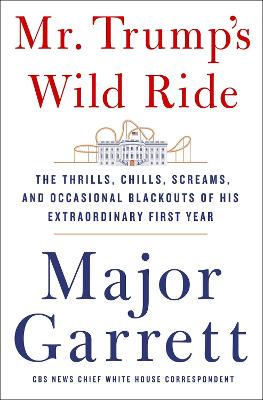 The Thrills, Chills, Screams, and Occasional Blackouts of His Extraordinary First Year in Office

American politics today are more polarizing and divisive than ever, but there's one thing we can all agree on; 2017 was one long, crazy year. There were too many triumphs and tragedies to count, and dozens of moments that will impact our lives for years to come; for even the most die-hard political junkies, some of the details are already starting to fall through the cracks. When every year in Trumpland feels like a decade, who can we turn to for an authoritative, entertaining breakdown of the most important and wide-reaching events? Look no further than Major Garrett. As CBS News' Chief White House Correspondent, he's been strapped into the front seat of Mr. Trump's Wild Ride since Inauguration Day.

Garrett has served as a White House correspondent for nearly two decades, covering the last four presidents for three different news outlets; he's an expert in executive branch intrigue, and he knows a little something about taking the long view. Mr. Trump's Wild Ride is neither an exercise in Trump-bashing nor a pro-Trump pep rally. It's a definitive, non-biased chronicle of a watershed year in the White House. Buckle up; we're in for a bumpy ride.

» Have you read this book? We'd like to know what you think about it - write a review about Mr. Trump's Wild Ride book by Major Garrett and you'll earn 50c in Boomerang Bucks loyalty dollars (you must be a Boomerang Books Account Holder - it's free to sign up and there are great benefits!)