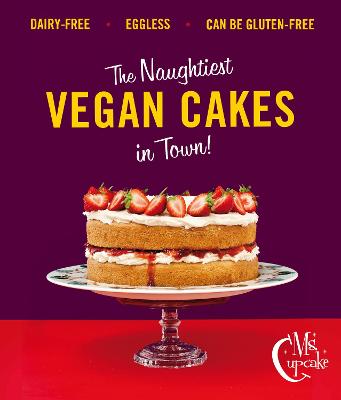 The Naughtiest Vegan Cakes in Town

Decadent and delicious dairy-free, vegan baking for everyone.

Ms Cupcake is a glamorous, fifties-styled vegan baker with a cake shop in trendy Brixton market and a bucketful of enthusiasm for delicious and decadent vegan cakes and bakes.

Her cupcakes are light as a feather, as sweet and tasty as any you'll eat, with the added benefit that many of them are, or can easily be made, gluten- and wheat-free, so almost anyone can enjoy them.

Chapters include cupcakes and muffins, frostings, cookies, tray-bakes and no-bakes, plus an extra-special chapter on deep-fried treats. Ms Cupcake brings her north American influences to the flavourings with peanut butter cookie sandwiches, snickerdoodles and fried cookie dough balls, plus she puts her own twist on British classics like her victoria sponge cake and bakewell tart cupcakes.

» Have you read this book? We'd like to know what you think about it - write a review about Ms Cupcake book by Mellissa Morgan and you'll earn 50c in Boomerang Bucks loyalty dollars (you must be a Boomerang Books Account Holder - it's free to sign up and there are great benefits!)

Ms Cupcake is a 1950s housewife with a dream of bringing decadent vegan baking to the masses. Originally from Canada, after her vegan cupcake stall in Greenwich market proved a massive success, she opened London s first vegan cake shop in Brixton market in 2011. Since then she has appeared regularly in the press, including appearing on Radio 4 s Woman s Hour, talking about how to set up a business, and has appeared at industry festivals across Europe demonstrating her baking techniques. She has been a food consultant for Sainsbury s vegan range and in 2011 won the Rising Star prize at the Baking Industry Awards. This year she will be a star speaker at the Cake and Bake Show. This is her first book.