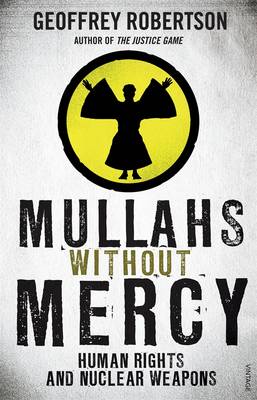 Geoffrey Robertson QC explains how to avoid war in the Middle East and a catastrophic nuclear disaster.

- What is worse- Iran getting the bomb or America bombing Iran?
- Will our children ever live in a world without nuclear weapons?
- Can states that mass-murder their own people be trusted with a weapon that
mass-murders?
- Will a nuclear explosion change the climate before climate change does?

In Mullahs Without Mercy, Geoffrey Robertson explores these and other awesome questions that arise from Iran's potential for acquiring the bomb. The scramble for nuclear weapons by brutal or unstable regimes poses the clearest present danger to the peace and the climate of the world.

This ground-breaking book exposes Iran's crimes against prisoners and dissidents, perpetrated by the very same mullahs who may soon have their fingers on nuclear triggers. But it argues that America has no legal right to attack, as Israel - hypocritically hiding its own nuclear arsenal - demands. In this vividly written and authoritative book, one of our highest-profile legal minds shows how the mushroom cloud hovering over the Middle East might yet have a silver lining - forcing the world to reassert the rule of international law, which could lead to the elimination of a weapon with the power to destroy us all.

Other Editions - Mullahs Without Mercy by Geoffrey Robertson 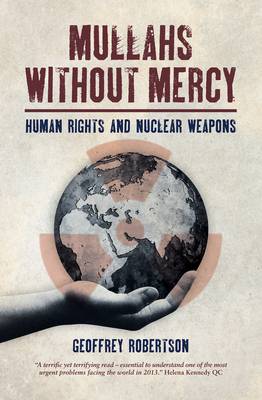 » Have you read this book? We'd like to know what you think about it - write a review about Mullahs Without Mercy book by Geoffrey Robertson and you'll earn 50c in Boomerang Bucks loyalty dollars (you must be a Boomerang Books Account Holder - it's free to sign up and there are great benefits!)

Geoffrey Robertson Q.C. is founder and head of the world s largest human rights practice, in London. He has prosecuted Hastings Banda, defended Julian Assange and acted for Human Rights Watch in the proceedings against General Pinochet. He served as the first president of the Special Court for Sierra Leone (which indicted Charles Taylor) and as a distinguished jurist member of the UN s Internal Justice Council. He has argued landmark cases at the European Court of Human Rights and The Hague war crimes tribunals, and has held office of Recorder (part-time judge) for many years in London. His books include Crimes Against Humanity The Struggle for Global Justice; The Tyrannicide Brief (the story of how Cromwell s lawyers mounted the first trial of a head of state; Statute of Liberty and an acclaimed memoir, The Justice Game. He is a Master of the Middle Temple and a Visiting Professor at the New College of the Humanities. In 2011 he was awarded the New York Bar Association s prize in international policy and law.