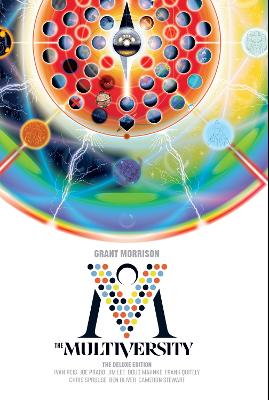 The biggest adventure in DC's history is here! Join visionary writer Grant Morrison, today's most talented artists, and a cast of unforgettable heroes from 52 alternative Earths of the DC Multiverse! Prepare to meet the Vampire League of Earth-43, the Justice Riders of Earth-18, Superdemon, Doc Fate, the super-sons of Superman and Batman, the rampaging Retaliators of Earth-8, the Atomic Knights of Justice, Dino-Cop, Sister Miracle, Lady Quark, and the latest, greatest Super Hero of Earth-Prime: YOU! THE MULTIVERSITY is more than a multipart comic-book series. It's a cosmos spanning, soul-shaking experience that puts YOU on the frontline in the battle for all creation against the demonic destroyers known as the Gentry! Featuring artwork by Ivan Reis (JUSTICE LEAGUE), Frank Quitely (ALL-STAR SUPERMAN), Cameron Stewart (BATGIRL) and many others, THE MULTIVERSITY tells an epic tale that span 52 Earths.

» Have you read this book? We'd like to know what you think about it - write a review about Multiversity Deluxe Edition HC book by Grant Morrison and you'll earn 50c in Boomerang Bucks loyalty dollars (you must be a Boomerang Books Account Holder - it's free to sign up and there are great benefits!)

Grant Morrison has been working with DC Comics for more than twenty years, beginning with his legendary runs on the revolutionary titles ANIMAL MAN and DOOM PATROL. Since then he has written numerous best-sellers -- including JLA, BATMAN and New X-Men -- as well as the critically acclaimed creator-owned series THE INVISIBLES, SEAGUY, THE FILTH, WE3 and JOE THE BARBARIAN. Morrison has also expanded the borders of the DC Universe in the award-winning pages of SEVEN SOLDIERS, ALL-STAR SUPERMAN, FINAL CRISIS and BATMAN, INC., and he is currently reinventing the Man of Steel in the all-new ACTION COMICS. In his secret identity, Morrison is a "counterculture" spokesperson, a musician, an award-winning playwright and a chaos magician. He is also the author of the New York Times best-seller Supergods, a groundbreaking psycho-historic mapping of the superhero as a cultural organism. He divides his time between his homes in Los Angeles and Scotland.