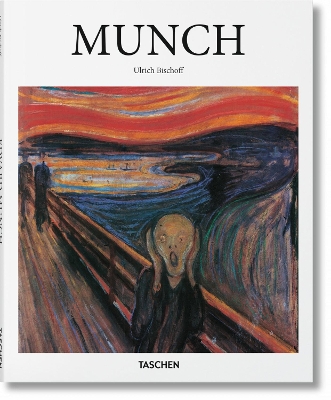 A hairless, ghostly figure on a bridge. The sky orange-red above him. His hands raised to his ears, his mouth wide in a haunting wail. In painting The Scream, Edvard Munch (1863-1944) created Mona Lisa for our times. The shriek of his iconic figure reverberates around the world, its echo resounding in the work of Andy Warhol, Jasper Johns, Martin Kippenberger, Marlene Dumas, and Tracey Emin.

This introductory book surveys Munch's staggering capacity for psychodrama in The Scream and beyond. With rich illustration, it looks at the lurid, dark, and deeply modern visions that made up the artist's response to relationships and emotions. These compelling images, regarded by the artist himself as a means of "free confession," remain as magnetic today as they were on the brink of modernism.

Born back in 1985, the Basic Art Series has evolved into the best-selling art book collection ever published. Each book in TASCHEN's Basic Art series features:

a detailed chronological summary of the life and oeuvre of the artist, covering his or her cultural and historical importance

» Have you read this book? We'd like to know what you think about it - write a review about Munch book by Ulrich Bischoff and you'll earn 50c in Boomerang Bucks loyalty dollars (you must be a Boomerang Books Account Holder - it's free to sign up and there are great benefits!)


A Preview for this title is currently not available.
More Books By Ulrich Bischoff
View All