Far away from any World War II battlefront, the citizens of Melbourne lived in fear of a serial killer - the Brownout Strangler.May 1942: Melbourne was torn between fearing Japanese invasion and revelling in the carnival atmosphere brought by the influx of 15,000 cashed-up American servicemen. But those US forces didn't guarantee safety. Not long after their arrival, the city would be gripped by panic when the body of a woman was found strangled, partially naked and brutally beaten. Six days later another woman was found dead and her body told the same horrific story. A murderer was stalking the streets. As women were warned not to travel alone, an intense manhunt ensued. Not long after a third woman was murdered, American soldier Eddie Leonski was arrested. A calculating psychopath, he had a twisted fascination with female voices, especially when they were singing . . . Acclaimed author Ian W. Shaw brings World War II Melbourne to life, and takes us into the mind of the Brownout Strangler, and a very different kind of terror.'enthralling . . . makes for a fascinating read.' Canberra Times on Ian W. Shaw's The Rag Tag Fleet

Other Editions - Murder at Dusk by Ian W. Shaw 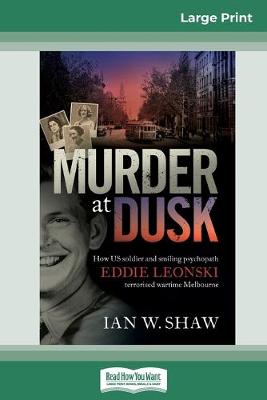 » Have you read this book? We'd like to know what you think about it - write a review about Murder at Dusk book by Ian W. Shaw and you'll earn 50c in Boomerang Bucks loyalty dollars (you must be a Boomerang Books Account Holder - it's free to sign up and there are great benefits!)

Ian W. Shaw is the author of six books: THE BLOODBATH, ON RADJI BEACH, GLENROWAN, THE GHOSTS OF ROEBUCK BAY, THE RAG TAG FLEET and MURDER AT DUSK. THE BLOODBATH was nominated for a Victorian Premier's Literary Award and was shortlisted in the Local History category. Ian is a graduate of the University of Melbourne and holds postgraduate degrees from Monash University and the University of Michigan. After ten years as a secondary school teacher, Ian worked in the Commonwealth public service and private enterprise for three decades, and is an expert on security issues. He lives in Canberra.

A Preview for this title is currently not available.
More Books By Ian W. Shaw
View All

Operation Babylift: The incredible story of the inspiring Australian women who rescued hundreds of orphans at the end of the Vietnam War
Available, ships in 7-10 business days
$28.04 $32.99

The Other Side of the Mountain: How a Tycoon, a Pastoralist and a Convict Helped Shape the Exploration of Colonial Australia
Available, ships in 7-10 business days
$25.49 $29.99