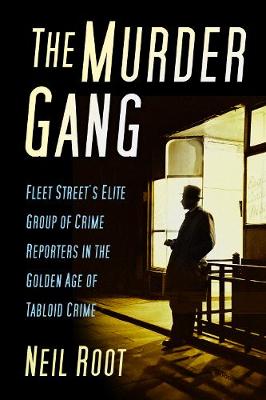 The first book to recount the extraordinary story of Fleet Street's Murder Gang. The Murder Gang recounts the remarkable true story of the elite group of renegade Fleet Street crime reporters who covered the most famous British murders between the mid-1930s and the mid-1960s, when murder dominated the front and inside pages of the tabloid newspapers. Members of the "Murder Gang" drank in the same Fleet Street pubs, but they were also ruthlessly competitive against each other. It was said that when the Daily Express covered a big murder story they would send four cars: the first car containing their reporters, the other three cars to block the road at crime scenes to stop other rival gang members from getting through. As a matter of course, "Murder Gang" members got their scoops by listening in to police radios, and used potatoes for jamming into rivals' exhaust pipes so their cars wouldn't start. Clandestine meetings with killers on the run from the police and huge payments to murderers and their families were just the tools of the trade, a far cry from today's regulations. In turns fascinating, shocking and comical, this tale of true crime, media and social history will have you turning the pages like those newspapers of old . . . AUTHOR: Neil Root is a true crime historian and the author of Gone (Mainstream, 2016), Frenzy! (Preface, 2012) and Twentieth-Century Spies (Summersdale, 2010). 20 b/w illustrations

» Have you read this book? We'd like to know what you think about it - write a review about Murder Gang book by Neil Root and you'll earn 50c in Boomerang Bucks loyalty dollars (you must be a Boomerang Books Account Holder - it's free to sign up and there are great benefits!)

A Preview for this title is currently not available.
More Books By Neil Root
View All

Crossing the Line of Duty: How Corruption, Greed and Sleaze Brought Down the Flying Squad
$38.69 $42.99