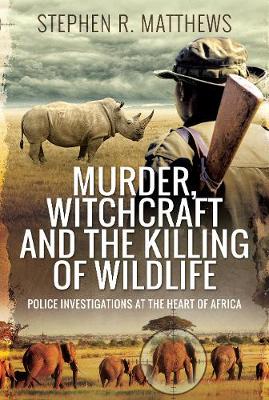 Murder, Witchcraft and the Killing of Wildlife: Police Investigations at the Heart of Africa

Description - Murder, Witchcraft and the Killing of Wildlife: Police Investigations at the Heart of Africa by Stephen Rabey Matthews

THIS WAS THE TIME OF THE BELGIAN CONGO DEBACLE, where ethnic cleansing coincided with Stephen R. Matthew's first police posting near the Northern Rhodesia border with the Congo. During this time, and at just 21 years old, Stephen was knifed, ambushed, stoned, wounded by bow and arrow and shotgun and had his hand broken several times. Action-packed, unadulterated stories of those frantic and dangerous years are meticulously detailed here. This young police inspector found himself confronted by fearsome actions and events well beyond his understanding, while serving in the elite police force in Northern Rhodesia (now Zambia). He found that the police were fighting on two fronts; trying to protect the vulnerable citizens of the country whilst at the same time endeavouring to stop the slaughter of wildlife. A stand-out, unique and comprehensive book, Murder, Witchcraft and the Killing of Wildlife depicts dramatic accounts of witchcraft-murders and cannibalism in all its repugnant forms. Highly dangerous solo investigations carried out by Stephen are detailed, including incidents of black magic, kidnapping, arson, gun-running and people trafficking. AUTHOR: Stephen was born in Guernsey shortly before the outbreak of the Second World War and later illegally deported to concentration camps in Germany with his family. After these horrendous events, Stephen and his family returned to Guernsey where he was educated at Elizabeth College. Stephen went on to join the Northern Rhodesia Police in 1959, with the express purpose of helping to Africanise the force prior to independence. His investigations took him over a great deal of the country, investigating horrendous and dangerous crimes, and securing more than 125 convictions for wildlife poaching. The recipient of a plethora of awards and commendations, Stephen married Dr Xue Fen Matthews and now spends much of his time living in both France and China. 44 b/w illustrations

Buy Murder, Witchcraft and the Killing of Wildlife: Police Investigations at the Heart of Africa by Stephen Rabey Matthews from Australia's Online Independent Bookstore, Boomerang Books.

Book Reviews - Murder, Witchcraft and the Killing of Wildlife: Police Investigations at the Heart of Africa by Stephen Rabey Matthews

» Have you read this book? We'd like to know what you think about it - write a review about Murder, Witchcraft and the Killing of Wildlife: Police Investigations at the Heart of Africa book by Stephen Rabey Matthews and you'll earn 50c in Boomerang Bucks loyalty dollars (you must be a Boomerang Books Account Holder - it's free to sign up and there are great benefits!)