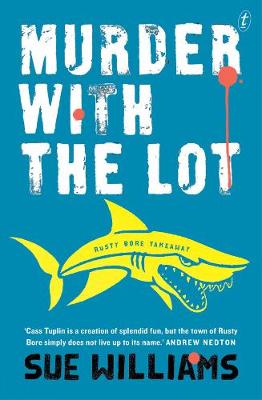 Murder With The Lot

Description - Murder With The Lot by Sue Williams

A smart, sassy self-appointed private investigator, Cass Tuplin is unforgettable and the town of Rusty Bore will never be the same...

Cass Tuplin's takeaway isn't the last shop left in Rusty Bore. There's also Vern's General Store. But it's true the town's not exactly overflowing with residents, and a stranger in Cass's shop is quite an event. Especially one like Clarence: suspicious, bleeding, looking for a burger with the lot and somewhere quiet to stay. Cass knows just the place. Then she finds out more about Clarence and wants him out of town, but it turns out that's not as easy as it sounds.

And then she finds the body.

It sounds like a job for the local police. Except that the local police is Cass's son Dean, who has his doubts about Cass. And there's no way he's expending police resources on his mother's fantasy crimes, not anymore. So it looks like Cass is going to have to find the killer on her own.

Sue Williams is a refreshing and irreverent new voice in crime fiction-Australia's answer to Janet Evanovich and Sue Grafton.


Book Reviews - Murder With The Lot by Sue Williams

» Have you read this book? We'd like to know what you think about it - write a review about Murder With The Lot book by Sue Williams and you'll earn 50c in Boomerang Bucks loyalty dollars (you must be a Boomerang Books Account Holder - it's free to sign up and there are great benefits!)

Book Review: Murder With The Lot by Sue Williams - Reviewed by CloggieA (26 May 2016)

Murder With The Lot is the first book in the Cass Tuplin murder mystery series by Australian science and travel writer, chartered accountant, marine biologist and author, Sue Williams. Rusty Bore, pop. 147, is a dying town in the Victorian Mallee. Almost two years a widow, the owner of Rusty Bore Take Away is in the prime of her life, or so Cass Tuplin, mother of two adult sons, tells herself (and others) on a regular basis, especially when it’s suggested her standards for a prospective partner might be set too high.

But she is distracted from all this when a slightly oily-looking young man in a suit, going by the name of Clarence….”Brown”, comes into the Take Away. “Skinny and slope-shouldered, he was holding tight to a briefcase, a scruffy-looking number with one of those combination locks near the handle….he looked like an accountant who’d been shoved backwards through his ledger…”. Clarence orders a burger, drips blood from an arm enclosed in a ripped and tattered sleeve onto her floor, expresses concern that someone might be tailing him, mumbles about writing a best-selling book and offers Cass an obscenely large sum for the rental of her old friend, Ernie’s shack up by Lake Perry.

The next morning, Cass gives directions for the shack to an expensively-dressed woman and her granddaughter, who are apparently family in search of said Clarence. But, plagued by misgivings about this hasty rental, Cass heads north to return the rental fee, only to find the woman’s body on the edge of Lake Perry, a fatal gunshot wound conspicuous on her forehead. When she rings Leading Senior Constable Dean Tuplin to report this murder, he is sceptical (possibly with good reason), and by the time he arrives, at the end of a dust storm, the body is nowhere to be found.

So begins this lively tale of murder, blackmail, arson, dog bites, accidental shootings, rumballs, trust funds and take away food. Williams sets her scene with consummate ease: the dust, the salt lake, the small-town mindset are all expertly conveyed. The novel features a cast of quirky characters: a masseuse with a bunch of pet ferrets; a one-armed general store owner with ear for gossip; an internet-surfing care-home resident with a taste for movies; a pedantic cop more interested in revenue-raising than clues; and an unemployed vegetarian environmental activist trying to give up bacon.

Cass herself has a wild imagination that leads her to jump to (often erroneous) conclusions on a bare minimum of facts, causing embarrassment and irritation to one son and engendering concern for her welfare in the other. Although “…you might be misguided, reckless and naïve, but you’re definitely courageous, Mum” and her heart does seem to be in the right place.

Williams’s character descriptions are a delight: “She was young, anywhere from thirteen to eighteen. Her face had that perilous blend of innocence and over-confidence, a girl her parents would never stop worrying about” and “The tall man got out first, his calf-length leather coat flapping around him in the wind. That’d have to be a two-cow coat, I thought, he must have been close to seven foot” are examples.

The plot is original and clever: murder victims and suspects begin to accumulate, with twists and red herrings keeping the pages turning. There is plenty of laugh-out-loud humour and Williams manages to include a plug for marine biology and for Aussie crime fiction: Arthur Upfield’s Death of A Lake gets a mention. A brilliant debut novel that will have readers eagerly awaiting the sequel. 5 stars

Sue Williams is the author of a crime series set in Rusty Bore, population 147. Sue was raised in country Victoria and hotly denies this provided any inspiration for her writing. She is a science and travel writer and a chartered accountant who also holds a PhD in marine biology. These days, Sue lives in Melbourne with her husband. Her previous two Cass Tuplin books are Murder with the Lot and Dead Men Don't Order Flake.

A Preview for this title is currently not available.
More Books By Sue Williams
View All