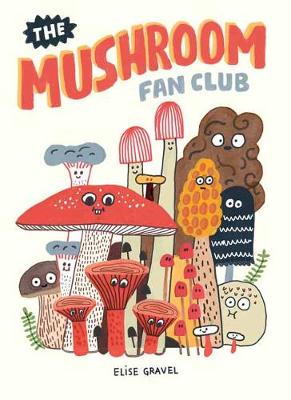 Elise Gravel is back with a whimsical look at one of her family s most beloved pastimes: mushroom hunting! Combining her love of exploring nature with her talent for anthropomorphizing everything, she takes us on a magical tour of the forest floor and examines a handful of her favorite alien specimens up close. While the beautiful coral mushroom looks like it belongs under the sea, the peculiar Lactarius indigo may be better suited for outer space. From the fun-to-stomp puffballs to the prince of the stinkers?the stinkhorn mushroom?and the musically inclined chanterelles, Gravel shares her knowledge of this fascinating kingdom by bringing each species to life in full felt-tip-marker glory. The Governor General Award winning author Gravel s first book with Drawn and Quarterly, If Found . . . Please Return to Elise Gravel, was a Junior Library Guild selection and an instant hit among librarians, parents, and kids alike. Fostering the same spirit of creativity and curiosity, The Mushroom Fan Club promises to inspire kids to look more closely at the world around them and to seek out all of life s little treasures, stinky or not!

» Have you read this book? We'd like to know what you think about it - write a review about Mushroom Fan Club book by Elise Gravel and you'll earn 50c in Boomerang Bucks loyalty dollars (you must be a Boomerang Books Account Holder - it's free to sign up and there are great benefits!)

Elise Gravel is an author-illustrator from Montreal, Quebec. After studying graphic design, she pursued a career writing and illustrating children s books, where her quirky and charming characters quickly won the hearts of children and adults worldwide. In 2012, Gravel received the Governor General s Literary Award for La cle a molette. A prolific artist, she has more than thirty children s books to her name, which have been translated into a dozen languages?including the Disgusting Critters series and If Found . . . Please Return to Elise Gravel, her challenge to young artists to keep a sketchbook. Gravel lives in Montreal with her spouse, two daughters, cats, and a few spiders.

A Preview for this title is currently not available.
More Books By Elise Gravel
View All