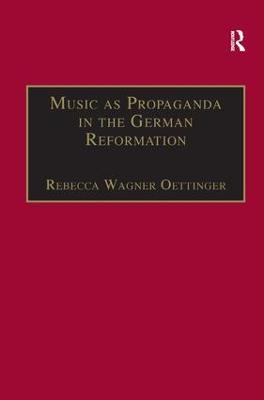 Music as Propaganda in the German Reformation

This volume is a revision of a dissertation in musicology, completed in 1999, on the role of popular music in the German Reformation. In the first four decades of the Reformation in Germany, hundreds of songs written in a popular style and set to familiar tunes, appeared in German territories. Some of these songs expressed the high ideals and deep faith of 16ht century German Christians, while others were scandalous, slanderous cries of anger at the papacy, the clergy, merchants who benefited from the Catholic Church's downfall, at Luther or other theologians whose specific articles of faith were at odds with those of a song's composer. This volume assess the power of these songs and others, and the relationship between music and morality in shaping the popular movement of the German Reformation. It looks at how popular songs spread ideas through all levels of German society and focuses on the lower strata of the population, the uneducated who had limited access to the polemic of the printed word.

» Have you read this book? We'd like to know what you think about it - write a review about Music as Propaganda in the German Reformation book by Rebecca Wagner Oettinger and you'll earn 50c in Boomerang Bucks loyalty dollars (you must be a Boomerang Books Account Holder - it's free to sign up and there are great benefits!)