The Music of Mauricio Kagel

Description - The Music of Mauricio Kagel by Bjoern Heile

Mauricio Kagel was undoubtedly one of the major figures in the new music of the last fifty years. Growing up in the rich cultural atmosphere of Buenos Aires in the 1940s and '50s, where the writer Jorge Luis Borges was one of his teachers, he became a member of avant-garde circles as well as receiving a rigorous musical education. By 1957 Kagel had acted on the advice of Pierre Boulez to move to Europe to pursue a career as a composer. He quickly established himself at Cologne, the rallying point for young composers at the time, and became one of the leading, if controversial, figures at the famous Darmstadt summer courses. He embraced multiple serialism, aleatory technique and electronics, but he is best known for his pioneering explorations in music theatre, radio play, film and mixed media. BjArn Heile charts Kagel's compositional development, considering the aesthetic and ideological issues the composer raises in his work. Focusing on Kagel's use of music as a means of intellectual inquiry, Heile shows Kagel to constantly question the nature of music and its role in society. Kagel's broadening of the concept of music to include theatre, film and other media, his disdain for purism as well as his subversive humour and sense of the absurd have challenged reified notions of music and art. Heile considers Kagel's background as Argentine immigrant to Europe (born to Russian-Jewish immigrants to Argentina) to situate the composer's aesthetic. What emerges is the breadth of Kagel's imagination and the multiplicity of contexts he drew from, which were both distinctive and, in the age of pluralist multiculturalism and globalization, exemplary. As Heile demonstrates, it was Kagel's enlarged notion of music as inherently multimedial that may be his most important contribution to new music, and on which his reputation ultimately rests.

Other Editions - The Music of Mauricio Kagel by Bjoern Heile 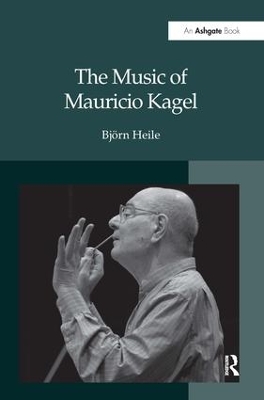 Book Reviews - The Music of Mauricio Kagel by Bjoern Heile

» Have you read this book? We'd like to know what you think about it - write a review about Music of Mauricio Kagel book by Bjoern Heile and you'll earn 50c in Boomerang Bucks loyalty dollars (you must be a Boomerang Books Account Holder - it's free to sign up and there are great benefits!)

Bjï¿½rn Heile is Lecturer in Music at the University of Sussex, UK.

A Preview for this title is currently not available.
More Books By Bjoern Heile
View All