Musical Meaning: Toward a Critical History

Description - Musical Meaning: Toward a Critical History by Lawrence Kramer

Lawrence Kramer has been a pivotal figure in the development of the controversial new musicology, integrating the study of music with social and cultural issues. This accessible and eloquently written book continues and deepens the trajectory of Kramer's thinking as it boldly argues that humanistic, not just technical, meaning is a basic force in music history and an indispensable factor in how, where, and when music is heard. Kramer draws on a broad range of music and theory to show that the problem of musical meaning is not just an intellectual puzzle, but a musical phenomenon in its own right.

How have romantic narratives involving Beethoven's "Moonlight" Sonata affected how we hear this famous piece, and what do they reveal about its music? How does John Coltrane's African American identity affect the way we hear him perform a relatively "white" pop standard like "My Favorite Things"? Why does music requiring great virtuosity have different cultural meanings than music that is not particularly virtuosic? Focusing on the classical repertoire from Beethoven to Shostakovich and also discussing jazz, popular music, and film and television music, Musical Meaning uncovers the historical importance of asking about meaning in the lived experience of musical works, styles, and performances. Kramer's writing, clear and full of memorable formulations, demonstrates that thinking about music can become a vital means of thinking about general questions of meaning, subjectivity, and value. In addition to providing theoretical advances and insights on particular pieces and repertoires, Musical Meaning will be provocative reading for those interested in issues of identity, gender, and cultural theory.

Other Editions - Musical Meaning: Toward a Critical History by Lawrence Kramer 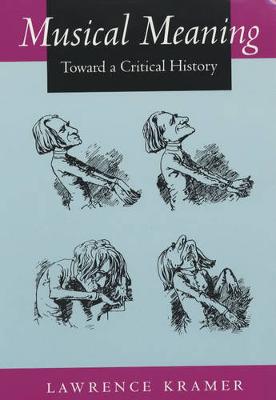 » Have you read this book? We'd like to know what you think about it - write a review about Musical Meaning: Toward a Critical History book by Lawrence Kramer and you'll earn 50c in Boomerang Bucks loyalty dollars (you must be a Boomerang Books Account Holder - it's free to sign up and there are great benefits!)


A Preview for this title is currently not available.
More Books By Lawrence Kramer
View All

Critical Musicology and the Responsibility of Response: Selected Essays
$75.59 $83.99