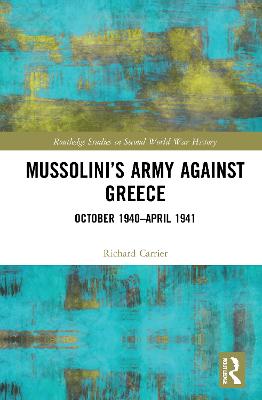 This book analyses why the Italian army failed to defeat its Greek opponent between October 1940 and April 1941. It thoroughly examines the multiple forms of ineffectiveness that plagued the political leadership as well as the military organisation.

Mussolini's aggression of Greece ranks among the most neglected campaigns of the Second World War. Initiated on 28 October 1940, the offensive came to a halt less than ten days later; by mid-November, the Greek counter-offensive put the Italian armies on the defensive, and back in Albania. From then on, the fatal interaction between failing command structures, inadequate weapons and equipment, unprepared and unmotivated combatants, and terrible logistics lowered to a dangerous level the fighting power of Italian combatants. This essay proposes that compared to the North African and Russian campaigns where the Regio Esercito achieved a decent level of military effectiveness, the operation against Greece was a military fiasco. Only the courage of its soldiers and the German intervention saved the dictator's army from complete disaster.

This book would appeal to anyone interested in the history of the world war, and to those involved in the study of military effectiveness and intrigued by why armies fail.

» Have you read this book? We'd like to know what you think about it - write a review about Mussolini's Army against Greece: October 1940-April 1941 book by Richard Carrier and you'll earn 50c in Boomerang Bucks loyalty dollars (you must be a Boomerang Books Account Holder - it's free to sign up and there are great benefits!)


A Preview for this title is currently not available.
More Books By Richard Carrier
View All

Jesus from Outer Space: What the Earliest Christians Really Believed about Christ
$43.19 $47.99